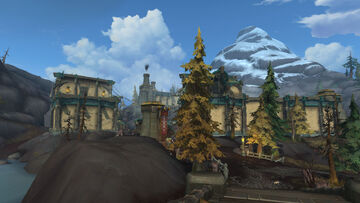 The Ashvane Foundry is a large manufacturing plant owned and operated by the Ashvane Trading Company, and situated just south of the Kul Tiran capital of Boralus. The largest of its kind in Tiragarde Sound, the foundry produces most of the Azerite weapons and ammunition that the Company have recently begun smuggling into the capital or arming pirates with. It is also responsible for supplying the Ashvane chemists of Bridgeport with Azerite to continue researching the substance.

The Ashvane Foundry today serves as the Company's main manufacturing plant on Kul Tiras, with large forges and warehouses for the processing of many products. With the emergence of Azerite, the foundry's focus was quickly shifted to the strange and powerful substance. Lady Priscilla Ashvane directed all efforts towards harnessing this power, and Azerite weapons and explosives were soon being churned out of the factory on a large scale. This was done without the knowledge of the authorities of House Proudmoore.

At the time, Forgemaster Farthing directly oversaw weapons and munitions production, while Taskmaster Williams ensured that all workers were kept in line by any means necessary. Workers were forced to work exhausting hours, and attempts at strike action were brutally suppressed.[1] Even children were employed as laborers in the foundry, snatched from the streets of Boralus and deported to the plant.[2] Much of the processed Azerite was sent on to the Company's chemical workshops in Bridgeport, where it was further refined and researched.[3]

As more Azerite was shipped to the Ashvane Foundry for further processing, the weapons produced were smuggled through Bridgeport and on to destinations across Tiragarde Sound, including Boralus and the Irontide pirates of Freehold. In this way, the foundry provided much of the armaments for the eventual coup planned by Lady Ashvane. The weapons used by pirates to breach Daelin's Gate some time later were Ashvane-produced in the foundry.

Eventually, an investigation led by Taelia of the Proudmoore Guard, along with Flynn Fairwind and an emissary of the Alliance, uncovered the work going on at the Ashvane Foundry. Having infiltrated the facility, they slew the Forgemaster and Taskmaster, rescued many of the urchins being forced to work, and determined Lady Ashvane's plans for the Azerite.[4] This information would ultimately lead them to Bridgeport, and then Freehold to the south.

After Ashvane's attempted coup in Boralus failed, the Ashvane Foundry was ordered to cease all weapons production by the Proudmoore Admiralty. After the decree was ignored, Alliance agents were sent to the site to forcibly halt production, and further disrupted the operation there.[5]

Kul Tiran forces under the command of Captain Serafina eventually managed to kick the Ashvanes out. Later, the Horde attacked the Kul Tiran garrison for their uniforms.[6]