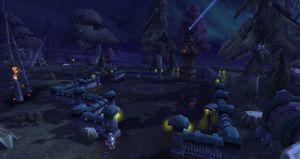 Ashwood Depot when controlled by the Horde 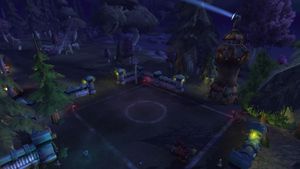 Ashwood Depot when controlled by the Alliance 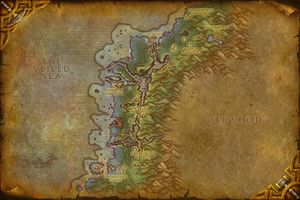 is a Horde camp found in northern Darkshore after the War of the Thorns. It is ran by Forsaken and goblins, and is featured in the fighting for the Battle for Darkshore.

The camp's commander was Deathstalker Commander Belmont. The camp was eventually attacked by Tyrande Whisperwind herself, now the avatar of the Night Warrior. While Belmont taunted Tyrande that the entirety of Darkshore would soon bolster the Forsaken's armies, Tyrande slew Belmont's forces then froze him in place and left him to rot.[1]

When the Alliance controls Darkshore, the area is overgrown with trees. Worgen are seen defusing the ordnance left here by the Horde.