Asric is a level 80 blood elf at the Argent Tournament Grounds. He argues constantly with Jadaar. The two of them are rumored to have been spotted enjoying the sights and sounds of Darkmoon Island occasionally. 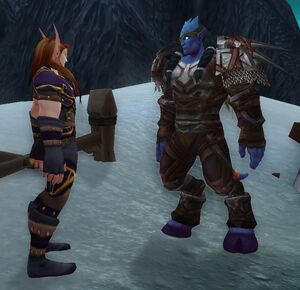 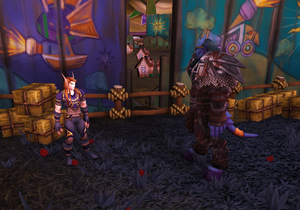 At the Darkmoon Faire.

Asric was an investigator with The Scryers tasked with investigating the stall formally held by Griftah along with Peacekeeper Jadaar in Shattrath City. Asric would occasionally mention how much he hated the job of investigating and the poor state of the stall.

After their investigation ended Jadaar and Asric moved on to the World's End Tavern, arguing with each other over who was responsible for the loss of evidence in the Griftah case, which allowed Griftah to return to his stall in the city.

This incident did not go down well with the leadership in Shattrath, as both Jadaar and Asric were fired by the Sha'tar and left Shattrath to find new employment. In Wrath of the Lich King, they found their way to Northrend, where they found themselves at Cantrips & Crows, the bar in the Underbelly of Dalaran. Jadaar appeared to be particularly bitter about this, and blames Asric for their loss of employment. Asric constantly teased Jadaar for his perceived incompetence, all the while pointing out that they were now free agents no longer tied to politics or duties.

When the Argent Tournament began, they both headed to the Argent Tournament Grounds to participate and become heroes to redeem themselves. However, both found obstacles that they were not be able to overcome. Stymied, they stand off to the side of Tingiyok's refreshment booth at the Aspirants' Ring, doing the only thing they can do in their situation... drink.

Arguments at the Cantrips & Crows

Asric says: Disgusting, I agree.
Jadaar says: And above it all, I somehow find myself saddled with you, the very man who caused me to lose my job in the first place!
Asric says: That was your doing, not mine, windbag. I found myself unemployed due to my unfortunate association with your failure.
Jadaar says: My failure?! MY FAILURE?! It was your incompetence that landed us here, you insufferable prat!
Asric rolls his eyes.
Asric says: Come off it, Jadaar. That's all I've heard out of you for months. No matter what happened, the point is that we're free agents now! No longer tied to politics or duties, able to roam where we will!
Jadaar says: Penniless and away from what we know in the middle of the frozen, undead-infested northland.
Asric says: Perhaps, but with the opportunity to make names for ourselves! Think of the reception you'd have in Shattrath as the savior of Azeroth, slayer of the Scourge!
Jadaar says: Eh.. perhaps, after another drink.

Conversations at The Aspirants' Ring

Jadaar says: And to yours, brat.
They both take a swig from their mugs.

Jadaar says: I don't know. I am uncertain this is the proper vehicle to heroism.
Asric says: What could be holding you back? You're hale, hearty... missing an eye perhaps, but that shouldn't keep you from competing!
Jadaar says: I dislike elekks. Strongly.
Asric says: Ah. That might be a problem.

Asric says: I had a... situation some time back with one of the individuals now heading up the Sunreavers here. A falling out, if you will.
Asric says: Needless to say, when I walked into the pavilion there was something of an altercation.
Jadaar says: They refused to train you?
Asric says: He suggested I do something else with the lance, instead. It's not my place to repeat vulgarities.

Asric says: There is no doubt in my mind you'd lose. Speed and wit triumphs over brute strength and bullheadedness any day of the week.
Jadaar says: Bullheadedness? It is my perseverance that has gotten us this far, dandy. You wouldn't last five seconds.
Asric says: Typical empty boasting. Still, the stables are rather distant and the drinks here are decent enough.
Jadaar says: I hear those lances are rough-hewn, too. I'm no fan of splinters.
Asric says: Just as well.

Asric says: The Citadel, correct? Facing the Lich King's most powerful minions.
Jadaar says: The two of us against the vast undead sea.
Asric says: Indeed.
Jadaar says: ...perhaps we should seek our fortune somewhere less likely to be fatal.
Asric says: Discretion is the better part of valor, after all.

There is some speculation that Asric was bribed by Griftah, as prompted by this exchange of dialogue between Asric and Jadaar in the tavern:

Asric says: [Thalassian] That man didn't pay me enough to put up with this blowhard...
Jadaar says: What was that?
Asric says: Oh, nothing. Merely thinking aloud.