For the story of the battle itself, see Siege of Blackrock Spire.

Assault on Blackrock Spire is the thirteenth mission of the Alliance campaign in Warcraft II: Tides of Darkness.

The remnants of the routed Orcish fleet have managed to reach the northern shores of Azeroth. Admiral Proudmoore believes that the Horde will attempt to reinforce their main Fortress at Blackrock Spire. Leading a large strikeforce of Lordaeron troops, Lord Lothar was sent to attempt a parlay with the Orcish Chieftain Orgrim Doomhammer. No reports have been heard in days... Assuming the worst, Admiral Proudmoore and King Terenas agree that it falls upon you to stage a final siege upon Blackrock Spire. The feral Dwarves of the Northeron wildlands have offered the service of their Gryphon Riders to assist in the decimation of the foul Orcs that have desecrated their homeland and slain the leader of the Alliance forces.

When Gul'dan betrayed the Horde in his search for the Tomb of Sargeras, he took half of Doomhammer's standing forces with him. This robbed the Warchief of his chance to destroy Capital City and Lordaeron with it, and forced him to spend time chasing down the traitors. Ultimately, the orcs, now disorganized and at half strength, had to abandon their campaign in the Northlands right on the eve of their final victory. This gave the Alliance time to regroup, and launch an offensive of their own. With the help of the dwarves, they managed to retake much of southern Khaz Modan, forcing the orcs to withdraw to Blackrock Spire, their headquarters.

The Alliance would have to pass through the Spire in order to retake the kingdom of Stormwind, and Doomhammer was unwilling to retreat any further. The stage was set for the one of the final battles between the Old Horde and the Alliance of Lordaeron.

In a desperate attempt to break the siege, Doomhammer personally led a charge out of the mountain to engage Lothar directly. The two squared off in a titanic battle. The duel raged for hours and left both combatants battered and bloody, but in the end, Doomhammer's youth and natural Orcish strength gave him the edge. He cut down Lothar and then retreated back into the Spire, leaving behind a handful of human survivors, including the paladin Turalyon, who would since be haunted by survivor's guilt.[1]

Doomhammer had hoped that the loss of their charismatic leader would cause the Alliance to splinter, but the plan quickly backfired on him. When the rest of the Alliance received no word from the group many travelled to Blackrock Spire to destroy the orcs. Enraged over the loss of their leader, the Alliance launched a full-scale assault on the mountain and surrounding region. 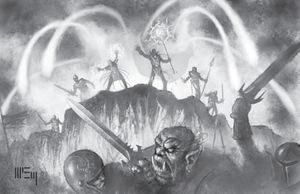 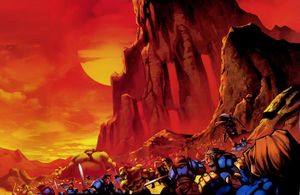 Assault on the Spire

Note: this account comes from the Official Strategy Guide, which features a first-person description of each mission from the game.

Lothar's intent during the parley was to accept the unconditional surrender of the Horde. Unfortunately, Doomhammer wanted to fight till the end. When Lothar and his troops arrived near Blackrock Spire, they were ambushed by a huge group of trolls and ogre magi. Lothar fought with courage, but his forces were outnumbered.

Milan's unit arrived later and found only workers and injured soldiers hiding in the few structures they had managed to defend upon their arrival on the northern shores of Azeroth. The town had been sacked once already, which meant that Lord Lothar was likely dead already. With the survivors describing the landing of enemy transport ships, the Alliance reinforcements decided to cripple their navy before concentrating on a major land assault. They immediately boarded their own few warships and, escorted by a gryphon, set out westward to follow the trail of the transports.

Two enemy destroyers were sunk before turning north, and near the mainland they spotted an oil platform being built. Not wanting to let them collect oil, they waited for the slower battleship and planned an attack. Two enemy juggernaughts waited to the southeast, while a cannon tower on land was judged able to strike targets only on the west side of the platform. First, the Alliance commander sent their gryphon to chase and sink the juggernaughts, while the warships sailed to the east side of the platform to begin demolition. By the time the gryphon had done its work, the platform fell and was replaced with a destroyer to prevent rebuilding. They completed the task, they then sent the battleship and gryphon north to strike the landed transports, and thus prevented the orcs under the orange standard from using them ever again.

Next on the list was the oil production of the red standard orcs, and for that Milan's forces sailed directly into the harbor toward another newly built platform, and again sent the gryphon to remove a catapult from the southeast shoreline near it. Then, while the ships pounded the platform, the gryphon started firing on the landed transports north of it to prevent them from making any deliveries. Next went the cannon tower west of the enemy shipyard, and by then the platform had been removed and replaced by a destroyer. Waiting until the tower was out of the way, the battleship then went to work on the shipyard, and its destruction ended their attacks by sea.

A third and final threat to Milan's base was the dragon roost on the central island, but it required a bit more effort. While the Orcish navy was being neutralized, Milan's workers built a few guard towers for minimal defense, then concentrated on all the structures and upgrades required to launch more gryphons into the air. They also built a foundry and an oil refinery to produce more battleships, but their gold mine was starting to run dry.

To solve the problem temporarily, a single transport was launched to ferry some workers east. There, the workers built a secondary town hall on a small island with another mine. This extra income allowed them to assemble a flotilla of four battleships, four destroyers, and three transports with which to land a mixed force of rangers and knights on the central island.

First, the warships removed as many enemy towers as possible, with the destroyers concentrating on any dragons that threatened. The land units came ashore on the north side and quickly swept into the village, slaughtering the defenders and finishing towers before removing the rest of the foul structures. More workers were ferried in, and a third hall was set up to plunder the rich mine there. From this point, the Horde was defenseless against the mobs of gryphons they launched from four aviaries. Standard landing parties of knights and ballistae made slow but steady work of anything remotely orcish, while gryphons circled overhead.

The entire combined Alliance forces were determined to avenge Lothar, and the soldiers knew that if they destroyed Blackrock Spire, the war would be won. The battle lasted for days. Thousands on both sides died. Dwarves, elves, humans, and gnomes had battled with orcs, ogres, trolls, goblins and daemons around the slopes, neither side giving ground.[2] 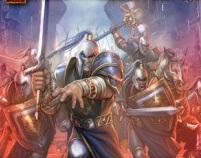 The Alliance of Lordaeron

In the midst of the battle, Turalyon rallied the Alliance forces with the battlecry "For Sir Lothar!" and led a fierce charge into the Horde. The piercing cry finally put fear into even the orcs and daemons amidst the height of their bloodlust and their ranks crumbled to the frenzied knights and rangers. Doomhammer was defeated, captured, and dragged in chains to Lordaeron by Turalyon himself. The Horde was broken by this battle and continued to be hounded all the way by the vengeful knights of the Alliance. Soon after, most of their allies abandoned them, and they were forced to make a retreat into the Black Morass around the Dark Portal.

Soon after the battle a great statue of Lord Lothar was erected at the base of Blackrock Spire. It still stands, despite being surrounded by a camp of orcs, and Lothar still points his sword defiantly at the Mountain's peak. The orc survivors of the battle were rounded up and placed in the first of the Alliance internment camps that would soon house the majority of their race. Orgrim Doomhammer eventually escaped captivity to wander through the Alterac Mountains.

During the battle, Commander Mograine took a dark crystal from the body of an orc spellcaster he had killed. The shadow energy was so overwhelming that it mangled Mograine's right hand. He kept the crystal locked away for over a decade until finally revealing it to friends in the Knights of the Silver Hand at a meeting in Southshore. This crystal — absorbing the light energies from the paladins and priests present — became the basis for a weapon intended solely to the destruction of the undead, better known as the Ashbringer.

In the actual gameplay of Warcraft II, when the mission starts, the player immediately sees Lothar torn apart by a mass of ogres and troll axethrowers along with a few other knights. There is no way to save Lothar or the knights. In later sources, including the Warcraft III: Reign of Chaos Game Manual, the battle was changed to say that Lothar and Doomhammer duelled together.