“The Legion will not win this day! We will show them what it means to stand together. For Azeroth!”

In preparing for the imminent assault on the Legion-held Broken Shore, representatives from all of the various Class Orders met to form the Armies of Legionfall, a new unified faction dedicated to thwarting the Burning Legion. Under the direction of Archmage Khadgar of the Kirin Tor, this new force successfully threw back the demons' assault on Dalaran and secured a foothold on the Broken Shore itself.

Based from the position of Deliverance Point, the Armies of Legionfall quickly set about engaging the Legion throughout the Broken Shore, securing further gains against Kil'jaeden's forces. The mortals' primary goal remains the Tomb of Sargeras, the focal point of the Burning Legion's invasion, where they seek to sever the Legion's link the Twisting Nether.

Wrath of the Deceiver 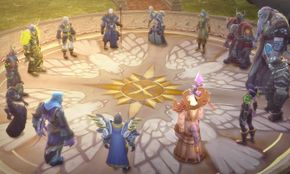 The meeting in Dalaran

The outcome of the siege of the Nighthold in Suramar City saw the conclusion of the Nightfallen rebellion, the death of the warlock Gul'dan, and the failure of the Burning Legion's plans in the region. The recovery of the final Pillar of Creation, the Eye of Aman'thul, also marked a new milestone in the fight against the Legion's invasion as a whole.

With all the ancient artifacts in hand, the portal facilitating the demons' assault on Azeroth could finally be sealed shut permanently, ending the immediate threat to the world. This portal, however, was located at the very center of the Legion's presence on the Broken Isles: the Tomb of Sargeras. A meeting was subsequently called by Archmage Khadgar of the Kirin Tor in the city of Dalaran to plan for the impending assault, with representatives from all of Azeroth's Class Orders in attendance.

During the ensuing meeting on [[Krasus' Landing]], Khadgar outlined to those gathered the importance of striking against the Legion immediately, now that all the Pillars of Creation were in their possession. Prophet Velen went on to preach caution and vigilance to those gathered; yet unbeknownst to even Velen, the demon lord Kil'jaeden himself was observing the gathering from the planet Argus. Infuriated on seeing his former friend, Kil'jaeden ordered a massive attack on Dalaran itself, after communing with his master Sargeras.

As Legion ships began bearing down on Dalaran, the Armies of Legionfall were quickly mobilized to deal with the threat. Along with Illidan Stormrage, Maiev Shadowsong and forces from the Class Orders, the Order Hall champions spearheaded an assault on the demons on and above the nearby Broken Shore.

Legion ships bear down on Dalaran

Immediately, forces from Dalaran counterattacked the Legion demonic vessels, beginning a series of heated battles on the ships' decks. Meanwhile, another force sent from Dalaran struck out toward the Broken Shore itself, clashing with the Burning Legion on the coastline along the southern coastline, and quickly carving a path through the demons inland.

After closing numerous portals and defeating Legion reinforcements, the mortal champions used a large portal created by the Council of the Black Harvest to gain access to the demon command ship hovering near the battlefield.

Having planted explosives around the vessel, the invaders then confronted the dreadlord commanding the Legion's forces, Mephistroth. Although he was not slain, Mephistroth retreated from the battle following the fight, leaving the ship in the mortals' hands. Shortly thereafter, the explosives were detonated and the ship was annihilated. The attack on Dalaran subsequently ground to a halt, while the Armies of Legionfall exploited their victory by establishing a permanent base on the Broken Shore, in the form of Deliverance Point.[2] 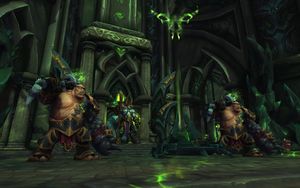 Demonic forces on the Broken Shore

Soon, the Armies of Legionfall began operating from several other locations throughout the Broken Shore, including Vengeance Point to the north and Aalgen Point in the east. The garrison of Illidari demon hunters at Vengeance Point, in particular, came under heavy attack from demonic forces, which attempted to overwhelm the outpost. Champions of the Order Halls ultimately succeeding in stemming this tide early in the conflict.[3]

With a base established, the Armies of Legionfall rapidly set about constructing various other important structures at Deliverance Point which would aid in the fight against the Burning Legion. In particular, the Mage Tower, Nether Disruptor, and Command Center became a major focus of the Order Halls, the building of which in turn required a great deal of resources and supplies secured across the region. Even when completed, however, these structures became key targets for demonic attacks and thus rarely remained intact for long.

Around this time, a sizeable group of naga, independent from the majority of the race loyal to Queen Azshara, arrived on the Broken Shore to pledge allegiance to the Burning Legion in exchange for great power. Incidentally, these naga took up residence at Felrage Strand along the coastline of the Broken Shore, as well as within the Tomb of Sargeras proper. They went on to join in the fight against the Armies of Legionfall, and became a target for the invaders as they attempted to push the Legion from the isles.[4]

In response to the incursion into the Broken Shore, the Burning Legion gradually increased its efforts in assaulting the remainder of the Broken Isles.[5] Large-scale invasions were launched in all the Isles' regions, with the denizens of each fighting desperately to repel the attacks. Forces engaged on the Broken Shore were subsequently forced to leave occasionally to aid the defeat of these invasions.

Meanwhile, Legion forces on the Broken Shore (continuously supplied from the Tomb of Sargeras) continued battle with the determined Armies of Legionfall. A great deal of resistance came in the form of the Sentinax, a powerful command ship which patrolled the skies over the Broken Shore, raining fire on those below and opening portals to initiate attacks.

The Cathedral of Eternal Night

In keeping with their objective of the Tomb of Sargeras, an attack was planned on the fallen temple to Elune in order to begin the process of closing the Legion's portal. A large force engaged the majority of the demons guarding the structure, while an elite team of champions aided by Illidan Stormrage and Maiev Shadowsong began to ascend to the upper reaches. They carved a path through the Legion defenders before reaching the summit of the Cathedral of Eternal Night. There, the party was confronted by Mephistroth, still commanding the Legion's defense of the Broken Shore.[6]

Seeking to return the

[Aegis of Aggramar] (a Pillar of Creation) to its resting place and thus close the demonic portal, the mortal invaders battled the dreadlord, who attempted to stop them. In the ensuing fight, Mephistroth was slain and an echo of the former Guardian Aegwynn appeared and spoke to the champions. She revealed to them what would truly be required to close the Legion's portal; the Pillars of Creation would have to be used in the depths of the Tomb of Sargeras. By placing the Pillars of Creation in the tomb, it would consequently restore Aegwynn's wards and push back against the Burning Legion invaders. Afterwards, the champions must venture into the depths of the tomb and use the Eye of Aman'Thul to eradicate the Felstorm and sever the Legion's link to Azeroth.[7]

Unbeknownst to the armies of Legionfall and Aegwynn's echo, when Gul'dan re-entered the tomb, he tore down Aegwynn's wards and opened a doorway for the Legion to invade.[8] Consequently, this allowed the fel army to tear at the vault in hopes of reanimating Sargeras' Fallen Avatar. The protective wards which were meant to secure the temple now become a hindrance and the champions must now use the Pillars of Creation to unbar their way.[9]

After weeks of a hard-fought battle, Azeroth's heroes, at last, enter the dark Tomb of Sargeras. Using the Pillars of Creation to unbar Aegwynn's protective wards, the band of heroes eventually defeated the remnants of the fel army in the vault and faced Sargeras' own avatar. Prophet Velen, Archmage Khadgar, Illidan, and Azeroth's heroes pursued Kil'jaeden to his command ship and vanquished him once and for all. With the death of Kil'jaeden, the Deceiver's command ship began to crash on Argus. Khadgar teleported everyone to the safety of Azsuna through a rift Illidan had opened with the

[Sargerite Keystone] before the ship exploded. However, after arriving safely on Azeroth, it was revealed Illidan had left a rift from Azeroth to Argus open, much to Khadgar's dismay. Horrified, Khadgar asked Illidan what he had done, and Illidan responded that sometimes the hand of fate must be forced.[8]