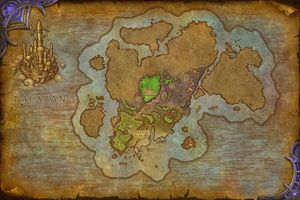 Map of the Assault on Broken Shore scenario.

It has been a long and costly war, <name>. It is time we put an end to it.

We will drive the Burning Legion from their seat of power and close their gateway into Azeroth. Our first step is to gain a foothold on the Broken Shore.

Divided, the Alliance and Horde faced defeat. But united as the Armies of Legionfall, we will claim victory!

We have come far together, <class>.

Mephistroth is on the run. We are beginning to dig in here at Deliverance Point.

A good start, I'd say, even though we still have much to do.

I am ready to launch the assault.

Archmage Khadgar says: I am confident you can handle your end, let us hope the others come through.

After accepting the quest, the patch 7.2.0 cutscene will start playing. The Burning Legion sends a massive fleet against you.

Stage 1: Into the Fray 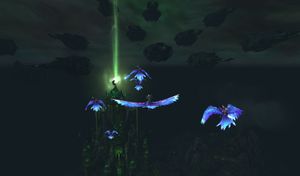 You will automatically be mounted on an arcane raven and fly out with a squad of Kirin Tor Mages. Many Legion ships are still warping in, and one in particular, Mephistroth's ship, starts firing at Dalaran.

Stage 2: Vanguard of the Assault

Archmage Khadgar yells: We must take the beach before we can claim the ruins to the west.
Kirin Tor Mage yells: Incoming!

Right after your landing, your squad of Kirin Tor Mages is crushed by a falling Infernal Siegebreaker. The united forces of the Armies of Legionfall are fighting to take secure the beach.

Follow the coastline west and take the winding trail leading northwest. Don't worry about the demons the NPCs are fighting; they'll immediately conclude their fighting and join you once you've reached Kalgoroth.

At this point, a portal will be opened by several Kirin Tor Mages in order to bring reinforcement, including Velen and Maiev with her Warden Vigilants. Follow the NPCs as they make their way further onto the Broken Shore.

Once Stage 4 is finished, the Burning Legion will open more portals that can't be closed down this time. Demons starts pouring through, including gigantic Infernal Siegebreakers, and Illidan makes his appearance as well in order to fight them.

The Felblaze Infernals he summons have a constant AoE aura, but they are stationary and don't attack you. Focus on Arganoth.

Dread Commander Arganoth says: I... will... return...
Prophet Velen says: Perhaps. But not his day, demon!

Archmage Khadgar says: Their command ship remains. We must destroy it before Dalaran's defenses fail! The Council of the Black Harvest has set up a gate for us. You may do the honors, <name>.
Mephistroth says: Yes, come forth. I could use some entertainment!
Prophet Velen says: Mephistroth!
Illidan Stormrage says: The warlocks took your world from you, nathrezim! I would not be so arrogant if i were you.
Mephistroth says: Silence!

Ritssyn Flamescowl provides a Demonic Gateway to access the Legion ship where Mephistroth resides alongside some Black Harvest Acolytes and Invokers.

Archmage Khadgar says: Here, these will help. Plant them around the ship. I will activate them from here when ready.

After getting inside the ship, use the Legion portal after placing the mana bombs in the first area to reach the next area to plant the rest. 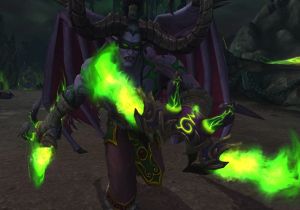 Illidan's new warglaives after his return.

Mephistroth yells: Another foolish mortal wishes to face me? So be it!

Avoid Mephistroth's Shadow Blasts. After injuring him somewhat, the demon will take his leave.

Mephistroth yells: Pathetic! My time is wasted here. With the power from the tomb, I will destroy all of you!
Archmage Khadgar says: Get Ready, <class title>. I'm pulling you out and detonating the bombs!

A short cutscene will play:

The arcane bombs detonate, destroying the command ship. A beam of arcane energy from the main Dalaran tower is then directed towards the Tomb of Sargeras, breaking the shielding protecting the fel portal.

After being teleported to Deliverance Point:

Archmage Khadgar says: Ah, there you are, <class title>. I was worried I might have activated the bombs a tad prematurely.
Illidan Stormrage says: We have won this day, but a grave threat still looms before us. The Legion's master has yet to play his hand.

Among the forces of the Armies of Legionfall are:

Among the forces of the Burning Legion are: