Assault on Zan'vess is a scenario in World of Warcraft: Mists of Pandaria released in patch 5.1.0.

Break the defenses of Zan'vess and recover the invaluable Mantid weapons.

You can't step on these bugs.

The mighty amber trees of the Dread Wastes have long been a crucial part of Mantid society; the Mantid farm and harvest the tissue of these trees, which they use to build structures throughout the Wastes. One of the greatest and largest of these trees, Zan’vess, towers over the small ridges south of the Briny Muck – and its imminent sha corruption endangers not only the local Mantid who rely upon it, but all those they might attack in their resulting madness.

To end the threat, you’ll need to take to the skies, destroying the wavering energy fields that protect the great tree while being blasted by the mantid’s natural defenses. After your aerial assault, you’ll break through insectoid monstrosities and battle to the tree on foot, where you’ll fight face to mandible with the mantid guardians who’ve dedicated their very lives to Zan’vess’s protection.[1]

According to Rear Admiral Zigg, this island contains the last remaining forces of Grand Empress Shek'zeer that are protecting a large weapons cache that Garrosh would like to retrieve for the Horde. Coincidentally, Sky Admiral Rogers would like to prevent that from happening by confiscating the cache first.

Starting from the ship adventurers arrive on, The Skyfire for Alliance and a warship for the Horde, they must take down the shields protecting the island. Alliance take to the skies with the Skyfire Gyrocopters while the Horde board Kor'kron Gunships and using their onboard rockets they must destroy the crystals that empower the shields.

After the shields are taken out the adventurers land on the north side of the island and begin their assault on foot, where they will eventually enter the Heart of Zan'vess. It's here Commander Tel'vrak protects the cache of weapons being stored here. 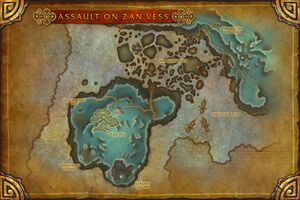 Launch an assault on the island of Zan'vess.

Destroy the Sonic Towers and deactivate the Zan'vess Defense Shield.

Stage 3: The Heart of Zan'vess

Storm the beach and reach the Heart of Zan'vess.