From Wowpedia
(Redirected from Astalor Bloodsworn)
Jump to: navigation, search

Astalor Bloodsworn is a powerful magister who was once an advisor to Prince Kael'thas Sunstrider, and became a co-founder of the Blood Knight Order along with his superior, Grand Magister Rommath. He and his magisters harnessed and twisted naaru M'uru's energies, allowing the blood elves to wield the Light once more. 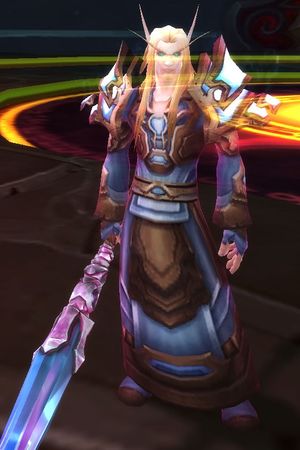 Astalor in the Third War.

Astalor accompanied Prince Kael'thas home to Quel'Thalas after the brutal Scourge invasion. Along with Rommath, he served as one of the prince's closest advisors. Astalor assisted Kael and Rommath in the binding of the tainted Sunwell, defended by Lor'themar Theron, Halduron Brightwing, Liadrin, and other volunteers. He was safely away when the well was destroyed. Astalor identified the mooncrystals used to seal the Sunwell as having become corrupted by the blast, but believed there was still value in the prince keeping them. Rommath was more hesitant, but also agreed.

Founding of the Blood Knights

Astalor in the Hall of Blood in Silvermoon City.

After the capture of M'uru, the naaru guardian of Tempest Keep, the blood elven scion Prince Kael'thas Sunstrider had the naaru shipped back to Silvermoon City, as a gift for his people to feed upon. Astalor, however, was not content with this notion.

Instead, Magister Astalor and several of the magisters worked tirelessly to harness and twist the naaru's energies, and ultimately succeeded in manipulating them. The end result of this was a free method by which the sin'dorei could now wield the Light again, as many of them had renounced their vows in contempt following the brutal Scourge invasion that sundered their homeland and people.

Lady Liadrin, a former priestess, was the first blood elf to offer herself to test the powers, thus becoming the first Blood Knight. Astalor assisted the former priestess in first communicating with M'uru, and remained close to the Blood Knights after their formation, his magi working tirelessly to keep M'uru bound in spite of the naaru's apparent recalcitrance.

After conspicuous items at Dawnstar Spire were uncovered by the Blood Knights, the contents were sent back to Silvermoon. Astalor deciphered them and learned that a new enemy in Quel'Thalas (calling himself "Thadirr") had plans for the stones of Light, Fire, and what remained of the stone of Spark. However, this was a ruse; Thadirr (a risen Dar'Khan Drathir, they soon realized) had no intention of using the stones, and had only used them as bait to entrap a number of Blood Knights. Astalor, the Royal Guard, and the regent lord rushed to their aid, and confronted the treacherous magister at Dawnstar.

Using the stones' power, Astalor was able to ward off the gathered undead and immobilize Dar'Khan, rendering the traitor defenseless and unable to avoid Lor'themar's killing blow.[2]

Astalor resided in the Hall of Blood with the Blood Knights' leader, Lady Liadrin, proudly sporting the

[Blood Knight Tabard]. He and his magi kept M'uru in check over the years, occasionally requiring Blood Knight assistance to keep them supplied with Light energy.[3] He remained there with Lord Solanar Bloodwrath after the betrayal of Kael'thas to the Burning Legion, a chain of events that resulted in the prince briefly attacking the Blood Knights' headquarters with the felblood and spiriting M'uru away to the Sunwell Plateau.

Astalor maintained that it would take more than Kael's treachery to break the Blood Knights, and assured players that even now Lady Liadrin was seeking a new source of power for the order.

Astalor, now without his Magister title, appears during the war in Draenor, along with Lady Liadrin and other Blood Knights as part of the Sunsworn. He is in charge of the animus golems, magically empowering them with blood magic and sending them to supplement the blood elf and draenei soldiers battling the Burning Legion forces. He accompanies Liadrin throughout Exarch's Refuge, Sunsworn Camp and Retribution Point.

Astalor brought an apprentice with him named Kaelynara Sunchaser, though an unspecified incident caused him to deem her incompetent, suspend her as his apprentice and send her back to Azeroth.

The subject of this section did not make it out of the beta stages of World of Warcraft: Warlords of Draenor.

Kael'thas and his felbloods be damned! All we've worked for is gone, but they're fools to think we won't fight back. Already, Lady Liadrin seeks a new source of power for our order. We will not be destroyed so easily.

He may be a blood mage.