Astranaar is a night elven town[1] located in central Ashenvale. It is the largest settlement in the region. It lies on an island within a lake,[2] straddling the main road through Ashenvale, connected to the mainland with only a pair of bridges.

Astranaar offers a wide range of services, as well as a flight master, to Alliance players. It also has an unnamed inn and a graveyard. 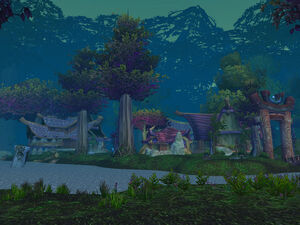 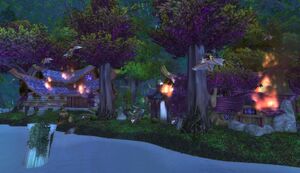 Astranaar under attack by the Horde.

After the War of the Shifting Sands, Valstann Staghelm was buried here by his family. His grave is still visible in the cemetery by the lake.[3]

Astranaar became the most important quest hub for Alliance adventurers in Ashenvale. Raene Wolfrunner sent players to cull the Thistlefur furbolgs north of the town, fearing that they could eventually find the courage to attack Astranaar directly.[4]

During the Cataclysm, the Horde invaded Ashenvale Forest, setting up a camp at Hellscream's Watch. From there, a group called Hellscream's Hellions attacked Astranaar with wind riders. Horde adventurers also bomb the town, setting it on fire[5] in a victorious assault.[6]

Alliance heroes would douse the fires[7] and use glaive throwers to drive out the wind riders.[8] Because of the Horde presence in the region, taxi services are offered to Maestra's Post (via Sentinel Luara's nightsabers) and Forest Song (via Vindicator Palanaar's elekk).

During this period, both draenei and worgen arrived to live in the town.

The night elves of Astranaar sent several caravans to the Northern Barrens during the preparations for the Siege of Orgrimmar.

After the defeat of the Burning Legion during their third invasion, the Horde attacked Ashenvale in a surprise strike. Rogues attacked several elvish outposts throughout the region. The blood elf Lorash Sunbeam led an assault against Astranaar itself, killing several of the guards and inhabitants, including sentinel Captain Alennah Starsong.[9] Even though the town suffered heavy losses, including civilians, in the end it was able to rout and slay the rogues.[10] The counterattack was led by Captain Delaryn Summermoon and the Darnassian City Guard.[11] The fallen were honored by the City Guard and their wisps released.[12]

Huntresses from Astranaar joined the main night elven army.[13] After losing the battle at the Falfarren River, Malfurion Stormrage and the elvish forces retreated to Astranaar to make a stand there. There, they laid a trap to the Horde, propping up elvish corpses to make it seem as if the whole town had been slaughtered by rogues. When Highlord Saurfang and his forces had occupied the abandoned town, Malfurion and his forces trapped Saurfang in an inn, collapsing it on the orc. Saurfang was saved by the timely appearance of Sylvanas, forcing the elves to retreat towards Darkshore.[14] The Horde took control of the town but eventually left for the Zoram'gar Outpost.

The Alliance eventually recaptured the town after the Burning of Teldrassil. Sentinel Thenysil assumed command of the remaining Sentinels in Ashenvale from the town. Horde champions were sent to infiltrate the town and take her down.[15] A Horde army led by Captain Tarkan also marched on Astranaar.[16]

Astrannar, with a population of 4000, is the largest town in Ashenvale located in its southwest. The road from the town splits in four major directions; northwest toward Darkshore, northeast toward Felwood, southeast in the direction of the Barrens, and directly east toward Azshara. The city is led by Raene Wolfrunner, who organizes the defense against the orcs and the corrupted furbolgs. It is an ancient settlement, and many families — even some specific elves — have lived in the city for generations.[17]