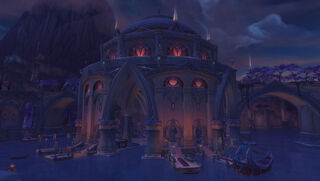 Astravar Harbor is the main port of the nightborne city of Suramar. Extending out from the center of the city into Suramar Bay, the harbor houses the majority of Suramar's waterborne vessels. In addition to the gondolas which serve as a major method of transport throughout the city, Astravar Harbor is notably home to numerous larger pleasure boats, the property of the city's higher social classes.

The harbor mainly consists of a large dome enclosing a series of docks and jetties and, due to its size, is capable of accommodating a large number of boats of different sizes. There are two levels to Astravar Harbor: the very lower story on the waterfront where boats dock, and an upper floor rising to the dome's ceiling. The passage between the two floors is attained via a series of arcane transporters. The entire harbor lies on top of the great bridge which extends out through Astravar further into the bay, eventually ending with the massive Nighthold, the seat of Suramar's Grand Magistrix and home to the Nightwell.

Astravar Harbor has been substantially involved in the recent turmoil which has gripped the city in the wake of the Burning Legion's arrival, and has had the attention of both Grand Magistrix Elisande and the Nightfallen rebellion directed upon it as a result of its strategic value.

Though it is unclear when exactly Astravar Harbor was constructed, prior to the conclusion of the War of the Ancients and the raising of Suramar's shield the city was landlocked in the continent of Old Kalimdor. The harbor's principal purpose was the housing of the city's boats, which consisted of gondolas and larger pleasure or transport boats. The harbor has never been frequented by any ships or vessels larger than pleasure boats; the nightborne do not use any large vessels as the shield which protected the city for over 10,000 years cut off access to all waterways outside Suramar Bay.

With the arrival of the Burning Legion, the raising of Suramar's shield, and the eventual agreement reached between Grand Magistrix Elisande and the demons, the city of Suramar was plunged into conflict. A rebellion, led by the Nightfallen, began to grow in strength and launched frequent attacks throughout the city aimed at toppling the Grand Magistrix and expelling the Legion. As one of the city's key features, Astravar Harbor became a target for the dissident forces. Notably, Nightfallen elements carried out arson attacks using arcflame in which many of the harbor's pleasure boats were set on fire.[citation needed]

As the insurrection grew in strength and Suramar began to see further conflict, Grand Magistrix Elisande continued to take more drastic and controversial actions. Further strengthening her ties with the Burning Legion, her forces began to ship detained nightborne citizens en masse to Legion bases outside Suramar, their souls to be used in the demons' rituals. Astravar rapidly became the central base from which captured nightborne were placed on boats and deported.[1] As such, the harbor was heavily occupied by Legion and Duskwatch forces, though many Duskwatch subsequently deserted their posts to defect to the rebellion, horrified by Elisande's actions.[2] The upper level of the center building was taken by The Nightfallen.