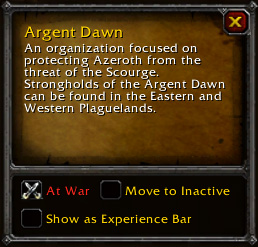 The At War check box in the Reputation panel allows you to attack members of a faction if they are not hostile toward you. If checked, you can initiate combat with NPCs of that faction, and your AoE spells will affect the mobs of that faction.

The members of the opposing factions are always at the lowest reputation level of hated, and are always locked in the At War state; it can't be checked for other races within your faction.

In 4.0.x, if your reputation with a faction is friendly or higher, you cannot attack members of that faction with melee attacks, ranged attacks, or any spells that require an enemy target—even if you've checked the "At War" checkbox for that faction.

The only way to attack such NPCs is to use AoE attacks on them.