It is time. The Stonemother will speak with you. You can find her throne in northern Deepholm, above the Scoured Reach.

Fleshlings just like you killed my daughter... my only daughter. With no provocation.

Not sated at stripping me of my family, more of you flocked to Deathwing to serve him in ravaging my home.

You're quite arrogant to come before me asking for MY help. I'm tempted to crush you where you stand.

To the northwest corner of the zone! All of the Stone Lords are there as well.

<The Stonemother stares down at you. Through you. As if she's peering at your soul.>
My daughter, Theradras, sequestered herself deep within the Crystal Caves of Terramok to grieve for her lost love, Zaetar. There, heartless, stoneless beings invaded and slaughtered her amidst her mourning.
If I had any reason to trust a creature afflicted by the curse of flesh, it was stripped from me that day. And yet in your arrogance, you persist.
One day, you will outlive your usefulness.

Players may also witness the following conversation during this phase of the quest: 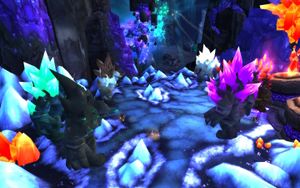 Therazane and the Stone Lords

Therazane says: You stand here trying to convince me that these beings of flesh should be trusted.
Therazane says: They are the literal incarnation of corruption. Their very skin screams it.
Therazane says: They seek only power, as the Twilight do. Yet you are confident that they will not turn on us. Did I raise you to be fools?
Gorsik the Tumultuous says: I have no love for the intruders, Stonemother, but these fleshlings went well out of their way to cleanse the filth from the Crimson Expanse.
Gorsik the Tumultuous says: They are not the Twilight. I see no reason to oppose their goals.
Therazane says: They slaughtered stone troggs, Gorik [sic]? This is supposed to sway me? It is not much of a feat.
Felsen the Enduring says: I've not spoken with the strangers, but I bore witness to their champion treading deep into the Crumbling Depths and returning unscathed. It is clearly capable.
Terrath the Steady says: This champion also faced the Stone Dragons and their Broodmother with no glimpse of fear or hesitation. I've seen the most hardy of giants falter where the fleshling did not.
Diamant the Patient says: You know where I stand, Stonemother.
Diamant the Patient says: This champion has proved intent and capable.
Diamant the Patient says: I see no reason to deny our trust.
Therazane says: What of you Boden? What do you see in this "champion"?
Boden the Imposing says: It's not bravery that drives it. It strode before me like it thought this place its home. It is a fool. It will surely get itself killed soon enough.
Therazane says: That very well may be. Even fools have uses though. I keep you around after all.