For the quest item of similar name, see 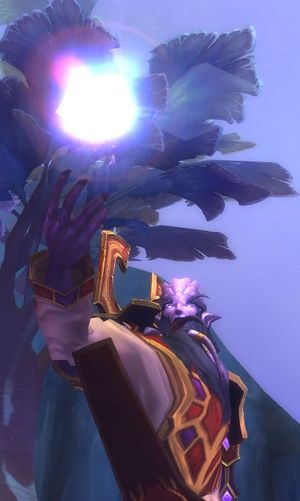 The Ata'mal crystal was an artifact of naaru origin bestowed to the eredar of Argus[1] long before Velen's time.[2] It was shattered into seven shards during the flight of the draenei, which have become lost over the last decades. The fragments are seen as both symbols of holy Light by the draenei and as potential weapons of immense power, notably by the Legion and the Illidari. 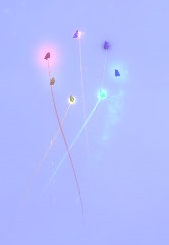 The seven shards of the crystal when Velen called for K'ure.

The shards are in the colors of light as seen when refracted through a prism - red, orange, yellow, green, blue, indigo and violet. They are named Heart of Fury (red), Brilliant Star (yellow), Leafshadow (green), Spirit's Song (violet), Eye of the Storm (blue), Fortune's Smile, and Shield of the Naaru.

The Ata'mal crystal was a sacred artifact of the eredar, accessible only by their three leaders - Archimonde, Kil'jaeden and Velen. When the Dark Titan, Sargeras, came to Argus and offered the eredar to join his cause in exchange for unlimited knowledge and power, Archimonde and Kil'jaeden readily agreed, but Velen - who possessed the gift of Sight that the others lacked - saw the truth behind Sargeras' offer, and how he intended to lay waste to the known universe.

Praying for guidance, Velen's pleas were answered by the naaru known as K'ure. K'ure instructed Velen to take the Ata'mal crystal and rally anyone willing to listen to him, and travel to Argus' tallest mountain on the longest day of the year. There, Velen's prayers would be answered. As Velen and his followers awaited a sign from the naaru, Archimonde and Kil'jaeden had caught wind of Velen's plan and unleashed the man'ari upon them. Raising the crystal into the air in desperation, Velen watched as the crystal was struck by a beam of light and suddenly shattered. The crystal created a barrier of light that prevented the man'ari from reaching them. At that moment, the gigantic dimensional ship known as the Genedar appeared, providing Velen and his followers their escape from Argus.

The other crystals' locations and purposes are unknown, but they presumably are still in the possession of Velen and the draenei.