This article is about the outdoor area and its lore. For the instanced dungeon, see Atal'Dazar (instance). For the achievement, see 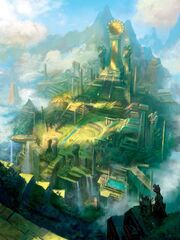 The main temple in the Chronicle art for Zuldazar resembles Atal'Dazar

Atal'Dazar (pronounced "AH-tahl-DUH-zawr")[1] is a series of royal and ancient pyramids[2] secluded high atop Mount Mugamba. It is named after King Dazar, the first king of the trolls. For millennia, the Zandalari kings and queens were laid to rest within the tombs of Atal'Dazar. These pyramids grew more elaborate with each passing ruler, as new rooms were constructed to house the deceased's vast wealth. Now, these once pristine halls have been corrupted by the Prophet Zul and his trusted lieutenant, Yazma, who seek to twist the power of these ancient kings for their own dark machinations.[3]

It is the location of two dungeons in World of Warcraft, the Atal'Dazar and the Kings' Rest instances.

King Rastakhan led the Warpack and the Horde adventurer to the pyramid to deal with the traitors.[4]

Bilgewater thieves later appeared in the southern wing to loot it. They used Gallywix's Personal Teleporter to get there.

Princess Talanji allowed the Darkspear tribe to place the

[Urn of Vol'jin] here. When the Speaker of the Horde did that, Bwonsamdi appeared and took it away.[5]