For other Athenaeum areas, see Athenaeum. 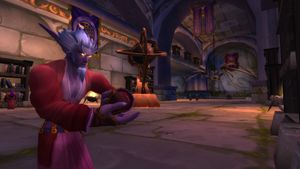 The Athenaeum is an area of Dire Maul West. It is located beyond the Prison of Immol'thar and leads on into Dire Maul North. One can access this area through either Dire Maul north or Dire Maul west, but both require the

The Athenaeum is also known as the library, where the Shen'dralar remain in seclusion, storing lost knowledge in the multitude of shelves in the large room. This is where players turn in Librams to receive the enchants they provide. This is done by talking to Lorekeeper Lydros after completing the

Many Highborne NPCs are located here, some, like Lorekeeper Mykos, Lorekeeper Kildrath and Lorekeeper Javon merely providing flavor, but some, like the Shen'dralar Provisioner, offering services. Prince Tortheldrin can also be found here, although he is not attackable until Immol'thar is dead. Beware, the prince is a lot tougher than he looks.

When the Horde invaded Dire Maul and the Highborne fled the ruins, the Athenaeum was burned down by the Horde. During the Fourth War, Wrathion traveled here.[1]