Athrikus Narassin was a level 31 named Highborne night elf in Darkshore. Balthule Shadowstrike wanted Athrikus's head. He was slain by Alliance adventurers, but even after his death his tome could be found in the burnt tower. During the Fourth War, he returned as a spectre. 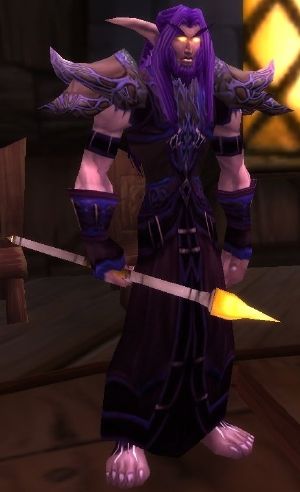 One of Azshara's most loyal servants, Athrikus Narassin was an aristocrat who prided himself on the many magical items he attained or crafted. Though there were many towns and places of habitation constructed upon the lakeshore, Ameth'Aran and Bashal'Aran villages were the foremost. Having the touch of Azshara, the Kaldorei's beloved Queen, in their creation. Her favored servitors, those of the Highborne, she brought to the twin towns to reside, and to govern them she placed Athrikus Narassin. Though it would be that he would spend most of his days in his Tower of Althalaxx, some ways removed of the towns.

His second, a mage known of his prowess in the arcane arts as much as with his physical abilities was Asterion, who lived among the people of Bashal'Aran, and went many times to Ameth'Aran to see to the needs and wants of its people.[3]

In the War of the Ancients, he was near the Well of Eternity when it exploded. Athrikus was blasted far away, and when he awoke, he found that he was missing all the items he had so loved. However, the Well's explosion had made him immortal, and given him the power to sap the energies of other magi to augment his own.[4]

In Ameth'Aran, all was in ruins, its people clinging to the ground as though that might spare them from the destruction. It was then that Athrikus Narassin appeared to guide Sargath and other Highborne to safety. With a spell he could protect them. He would say. While around them, brother and sister, father and mother perished. They would have life eternal trapped inside his soulgems, and have naught to fear from the Sundering that was to come.[5]

10,000 years later, Athrikus resided at the top of the Tower of Althalaxx and still possessed three soulgems, and two of them were being held in Night Run and Satyrnaar, satyr-held areas in northeast Ashenvale. The soul of Asterion was sealed in Bashal'Aran and guarded by the Satyrs of Deth'ryll. He founded the Cult of the Dark Strand with many warlocks, including even a foul satyr. One of his most loyal servants was the orc warlock Ilkrud Magthrull. Athrikus was empowered by soulgems holding the trapped Highborne souls. He was also a pawn of the Shadow Council, of which his cult was an ally or a part.

Following the Cataclysm his tower has been razed and the ruins are being searched by forsaken scavengers looking for his research. The night elves of Darkshore presumed him long dead and no longer a concern, but wished to keep the research out of enemy hands.[6]

With the Battle for Darkshore, many ancestral spirits at the Tower of Althalaxx were driven to madness by the Horde, including Athrikus who returned as a spectre. Some of his soul gems still remained at the tower as well, and were shattered by adventurers to free the trapped Highborne spirits.[7]

Aggro
Your soul is mine!

Death
No! I cannot be... defeated!