Atiesh, Greatstaff of the Guardian

For the boss in Stratholme, see Atiesh (demon). For the achievement, see

[Atiesh, Greatstaff of the Guardian]. 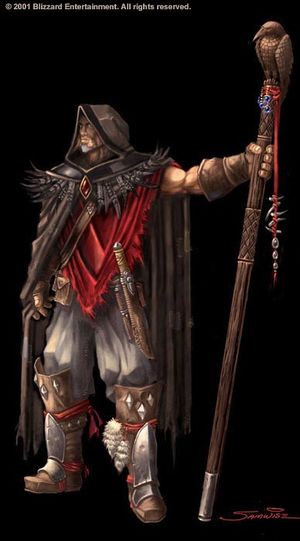 Atiesh, Greatstaff of the Guardian is a powerful staff passed down through the line of the Guardians of Tirisfal up until and including Medivh, the Last Guardian.[1] It is currently wielded by Medivh's former apprentice, Khadgar. The staff was born from the "seed of hate"[2] and grants its wielder "power unending".[1]

Atiesh can be used to open up portals to Karazhan and is also known for attracting ravens towards the wielder.[3] Atiesh gives its wielder the ability to turn into a raven themselves.[4]

Medivh holding Atiesh while talking to Thrall in a vision.

Its date of creation is unknown, but it is known that Atiesh was forged from the "seed of hate" and was wielded by each Guardian of Tirisfal, including Aegwynn,[5] until the line ended with Medivh. This would set the age of Atiesh at thousands of years.

Following the assassination of Medivh, the staff was found by the Kirin Tor and brought to Dalaran. This was followed by a series of tragic events, leading to the death of every Kirin Tor mage that came into contact with Atiesh. The staff was put behind impenetrable barriers of magic and mage Angela Dosantos was appointed to watch over it.[2]

The staff was lost and shattered, presumably due the failsafe system of the magical barrier, during the destruction of Dalaran by Archimonde.[1][2] The forty-two pieces of Atiesh were scattered across all of Azeroth.[1] Kel'Thuzad sought to find the pieces and reform the staff. The Highborne archmage Tarsis Kir-Moldir, who had previously wielded the staff briefly, managed to gather twenty pieces of Atiesh, but he was found by the Scourge. Kel'Thuzad was then in possession of all the pieces, which he entrusted to his lieutenants, except for one, the

[Base of Atiesh], found by Brann Bronzebeard.[1] However, Brann somehow lost it to C'Thun in Ahn'Qiraj.

When Naxxramas appeared over the Eastern Plaguelands, the Argent Dawn attempted to prevent this powerful focus of power from falling into the hands of the necromancer-lich, Kel'Thuzad,[2] and were apparently successful in their mission.

Later, Meryl Winterstorm sent Garona Halforcen on a mission to retrieve the base of the shattered staff[6] from within the remains of C'Thun. Garona succeeded and gave the base to Med'an, who restored the whole staff.[7]

From the war in Draenor onward, the staff is wielded by Khadgar, the former apprentice of Medivh. It is unclear how he obtained it, as it was last seen in Med'an's possession.[8][9] The most likely answer is that Med'an gave it to him.[10] 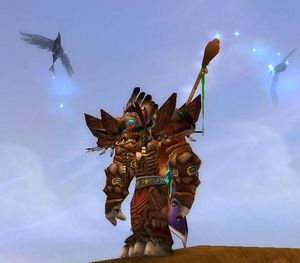 A tauren wielding Atiesh, with lured ravens in the background.

Atiesh, Greatstaff of the Guardian, is a legendary caster staff which could be assembled via a quest prior to the release of patch 3.0.2, when Naxxramas moved back to Northrend. The quest begins inside Naxxramas and involves obtaining several parts of the staff.

ImageLink.org Gallery of Tarsis in Naxxramas
Retrieved from "https://wow.gamepedia.com/index.php?title=Atiesh,_Greatstaff_of_the_Guardian&oldid=5542308"
Categories: