Not to be confused with Atul'nazman.
For the quest of the same name, see 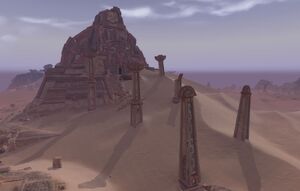 The buried pyramid of Atul'Aman

is a titan pyramid in central Vol'dun. It was the location of one of the three seals that bound G'huun within Uldir until it was broken millennia ago by Mythrax.[1] Mythrax was subsequently defeated by Sethraliss, after which the three sethrak Keepers Sulthis, Vorrik, and Korthek worked together to cast a barrier around the pyramid and seal the C'Thrax's corpse within to prevent anyone from raising the creature again.[1][2][3][4][5] Each of the Keepers then created a keystone, imbued with their power, to ensure that the tomb would remain undisturbed.[3][6] Eventually, Korthek began plotting to revive Mythrax in order to use the creature to conquer Zandalar. He declared himself emperor, formed the Faithless, and killed Sulthis, but not before the latter hid away his keystone.[1] The Faithless and their allies, the Sandfury sand trolls led by General Jakra'zet, then began searching Vol'dun for the remaining keys that would allow them to break the barrier around Atul'Aman.[7]

In the current day, Sandfury forces are camped around the eastern terraces surrounding the entrance into the pyramid's main chamber containing the broken seal. The Abandoned Passage in the southwest along with an opening in the pyramid's northwestern base lead into the lower areas below the surface, the Fetid Crypt and the Blood Font, which are overrun with Old God corruption. All three entrances into Atul'Aman are normally blocked by the Keepers' magic. The Sandfury Hideout lies in the dunes on the structure's north side, while the Eastern Dunes stretch to the east and the ruins of Zul'Ahjin lie directly to the south. A small Reliquary camp inhabited by Daxx Bombhand and Elisa Veilsong sits above the northwestern entrance.

While passing by Atul'Aman in search of Warguard Rakera, the Horde adventurer encountered Jakra'zet and his servant Grozztok the Blackheart in front the main entrance, unsuccessfully trying to find a way past the barrier.[8] Later, the adventurer discovered Sulthis' keystone in Zul'Ahjin and brought it to Vorrik, who stored it alongside his own key in the Sanctuary of the Devoted.[1] Vorrik and the adventurer then went to confront Korthek in his stronghold, leaving Rakera and Bladeguard Kaja to protect the keys.[9] However, while Vorrik and his allies were battling Korthek, the latter revealed that he had already given his key to Jakra'zet.[10] After killing the emperor and returning to the sanctuary, Vorrik and the adventurer found that Jakra'zet's forces had attacked the temple and stolen the remaining two keys, allowing the general to break the seal on Atul'Aman[11] (opening up all three entrances into the pyramid). Vorrik and the adventurer caught up with Rakera and Kaja below Atul'Aman,[12] but they were ultimately unable to stop Jakra'zet: the general sacrificed himself by jumping into the Blood Font, providing the final blood sacrifice needed to raise Mythrax and forcing the adventurer and their companions to flee for their lives.[13]

In front of the eastern entrance:

At the Reliquary camp on the north side:

At the northwestern tunnel entrance while