For the new version of the area, see Ruins of Auberdine.

Auberdine was a night elven town in Darkshore. It was the most important settlement in the area before its destruction during the Cataclysm, serving as the main port of the Alliance in northern Kalimdor. Since the Fourth War, the Ruins of Auberdine have been heavily contested by the Forsaken and the elves.

Auberdine as seen in the comic series.

Auberdine lied on the shores of the Veiled Sea within the region of Darkshore. The closeness of the sea produced a damp climate, with a seemingly omnipresent cover of storm clouds. The town was surrounded by hills and pine forests.[1]

Auberdine featured typical night elven architecture – low-slung, arched, wooden buildings. It had stone and earthen streets, the paths and bridges illuminated by lamps. The town had both residential and commercial areas. It only had a few public gathering places, these included the Last Haven Tavern, another inn,[2] the town square and the hunter's hall. Auberdine also had a prominent port, with both passenger and cargo ships[3] from the Eastern Kingdoms calling here. The port had its own, unique lighthouse of night elven design.

The houses in the town had wooden floors and furniture typical of elven architecture. A domicile visited by Broll Bearmantle had the typical trappings of a night elven home, with plant life within. It had sleeping quarters, where the inhabitants could lay on woven mats.[4]

The mainland location of the town, as well as its port, made it the prime location for night elves trading with the outside world. This produced a racially mixed population that included dwarves, gnomes, humans and even high elves. To help the outsiders, Auberdine was unusually well lit for a night elven settlement, and featured some bilingual signposts in both Darnassian and Common.[5]

The town was led by the elder Thundris Windweaver, who had stewardship of the day-to-day affairs of the townsfolk.[6] He was supported by the Auberdine Village Council, who hired adventurers for a number of purposes.[3] The defense was coordinated by the local Sentinels, with Sentinel Glynda Nal'Shea reporting directly to the council.[7]

Auberdine was generally looked down upon and shunned by the denizens of Darnassus, including Broll Bearmantle, who considered the people of Auberdine as nothing better than outcasts and misfits. The town had a garrison of Sentinels, but they separated themselves from the other townsfolk. The town even had some druids, although it was considered to be a place not entirely conducive to druidic ways.[8] The town was considered quiet by outsiders.[9] Shandris Feathermoon, however, remembered Auberdine as a place of laughter.[10]

At its peak, the town provided many services to its citizens. Apart from the port, it had its own hippogryph master, innkeeper, profession trainers and vendors. Dwarves had set up a small smithy in town. Fishing and crabbing was particularly popular in the area, braving the dangers of the coastline.[11] Murlocs, in particular, posed a grave problem to the fishing boats leaving the port.[12] (In turn, the locals made armor of the scales stripped off of the murlocs' corpses.)[13]

During the times of the Kaldorei Empire, the region currently known as Darkshore was further inland. It featured great cities such as Ameth'Aran, Bashal'Aran and Lathar'Lazal.[14] This all changed with the Sundering, which reduced the area to ruins, and created a new coastline cutting through the region. After this, Darkshore remained generally uninhabited. Several attempts were made to settle the land – by night elves and others –, however these had all failed. Auberdine was the only significant stronghold that managed to persist in the area.[1]

Auberdine has a long history as a port. A long time ago, a ship commanded by the elf Elura crashed on the rocks near the lighthouse, losing her shipment of

[Elunite Ore].[15] In the past, Broll Bearmantle.[8] and Shandris Feathermoon had both visited the town.[10]

After the night elves joined the Alliance, Auberdine became their premier port in northern Kalimdor. The Bravery provided transportation from here to Menethil Harbor, while The Moonspray worked as a ferry between Auberdine and Rut'theran Village at the foot of Teldrassil. Sentinels from Auberdine provided security to The Bravery during its trips.

The town and its area were facing a number of threats. The moonkin to the east were made hostile by the influence of a red crystal from the Felwood.[16] The Blackwood furbolg to the south were corrupted by

[Fel Moss].[17] Murlocs were active alongside the coastline, going as far as to sink ships.[3] The village council hired adventurers to take care of these, and other problems.

A new ship was added to the port – the Elune's Blessing, providing transportation to the draenei homeland of Azuremyst Isle, calling at Valaar's Berth.

The Bravery was rerouted to the newly established harbor within Stormwind City.

The whole population of Auberdine succumbed to the Emerald Nightmare, falling into a deep, unwaking nightmarish sleep. Tyrande Whisperwind and Broll Bearmantle visited the town, almost succumbing to the nightmare themselves. They were only saved by the intervention of Lucan Foxblood, who spirited them away to safety.[18]

Auberdine being destroyed by Deathwing. 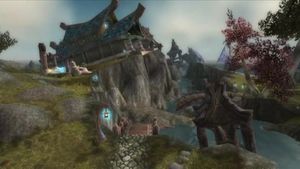 Auberdine was hit by the great dragon Deathwing during his return to the surface from Deepholm. He engulfed the town in flames and caused a massive earthquake which damaged the whole region.[19][20] Auberdine's port fell into the sea, and most of its buildings were wrecked. Many of the surviving inhabitants departed in the wake of the destruction,[21] leaving the ruins of Auberdine behind.

Because of the Cataclysm, Auberdine lost its status as an Alliance travel hub. The Moonspray was suspended, and both the Elune's Blessing and The Bravery were rerouted to Rut'theran Village. The town lost its inn, flight master and almost all friendly inhabitants. The moonwell and the forge, however, remain intact.

Before Cataclysm, Auberdine had the following travel connections:

Auberdine used to be the port for night elves, having direct access to Rut'theran Village, and going to most of Kalimdor and Stormwind City. However, after the Cataclysm the town was destroyed and Rut'theran Village took most of the port functions that were previously in Auberdine.

Before Cataclysm, the following zones were reachable from Auberdine:

Auberdine had previously been damaged during the Sundering and later wars. After the Third War, the night elves who had been living in Darkshore began to focus their attention on rebuilding the town. Most of the town is made of new buildings, as the night elves cleared away the ruins they could not restore. The town had about 200 residents just after the Third War, mostly night elves,[22] but has grew to about 5,500 residents in recent times.[23] At some point Darian Thunderhammer came here.

Auberdine used to be the sole warm haven amid the desolate land of Darkshore. The oppressive weather and the creatures that lurk in the shadows make much of Darkshore inhospitable, but this thriving trading post was a safe place for heroes to restock and rest.

While quite appealing, Auberdine offered a brutal contrast from the serenity that can be felt in Darnassus. Even the sun seems to be too shy to cast its rays upon the land, which seems to be kept cloaked in a dark and mysterious mist. The buildings in Auberdine were quite different from those found in Darnassus. Here, the stone was mostly replaced by wood, and every house had a gloomy look, as if a spell was cast upon the outpost.

Visitors could stop at the Fish Eye Tavern for a hot bite to eat, purchase supplies at Tassik's Tradepost, or, if they had the knack for sailing, rent a skiff at Syran's Boat House. Residents were quite outgoing for night elves and free with advice, whether offering tips on sailing or advising on travel through Darkshore. The residents' jovial demeanor was but a thin veneer covering a grim determination to protect their homes. There were few armed forces in a military sense, but local scouts and rangers served as a ready militia and were prepared to defend their quiet hamlet to the death.[22]