Auchenai Crypts is the main seat of power for the Auchenai - a renegade religious sect of draenei led by the Exarch Maladaar. The crypts are populated by these draenei and the unliving creatures they have summoned. The most important remains interred within the crypt are those of D'ore, one of the naaru. D'ore perished in the collision that brought Oshu'gun (and the draenei) to Draenor. In death, D'ore entered its void stage. The dark energies exuded by this phenomenon resulted, directly or indirectly, in the evils that have since befallen the crypts and indeed, all of Auchindoun. It is a wing of the Auchindoun instance. Its entrance can be found to the west of the Ring of Observance.

Killing the mobs in Auchenai Crypts yields reputation gains for Lower City through honored; once you are past honored, you can gain rep by doing this instance in heroic mode through exalted.

Many unsavory experiments were undertaken here in the pursuit of a greater understanding of the necromantic arts. Many spirits were tortured or destroyed therein.[2]

Before Maladaar, another Exarch led the crypts.[3]

Pulls in the Crypts present a unique challenge for a few reasons.

The mobs in the Auchenai Crypts are mostly humanoid, undead draenei and skeletons. An average pull will consist of two or three draenei, with two to four undead non-elites joining the fight. There are many wandering non-elite undead in this instance, which in many cases can be avoided. 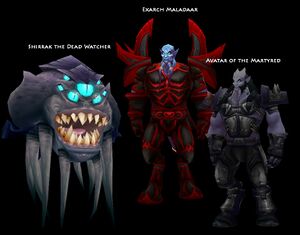 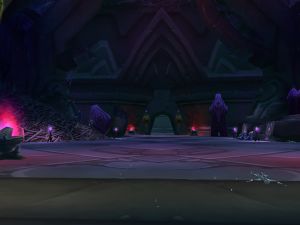