Auchindoun [ˈɑːkɪnˈduːn] is a mausoleum,[1] a "city of the dead", a former draenei holy site where the dead were laid to rest, placed in the ground.[2] It is located in the middle of the Bone Wastes in the Terokkar Forest within Outland.

Auchindoun before the destruction of Draenor.

It was from the Crypt of Remembrance, the first tomb, that the vast mausoleum of Auchindoun was born.[1]

When the naaru D'ore fell its remains were gathered by Exarch Othaar and his Sha'tari and brought to Auchindoun, where they hoped to study them in order to hopefully learn enough to communicate with the other naaru and draenei beyond Draenor.[3]

After the fall of Shattrath City, many vindicators, priests, and Rangari fled to Auchindoun in hopes of defending it from the Horde. Exarch Maladaar organized the military defenses, and they fiercely defended Auchindoun from Teron'gor and the Shadow Council. They also received aid from Auchindoun's departed spirits, and slaughtered many of the Shadow Council's agents. As Maladaar and his forces closed in, Teron'gor sought out the warlocks who pooled their powers together and reached beyond the veil of reality. They sought to bring a powerful demon into the world, but in their wild desperation found something else instead: Murmur. This otherworldly elemental creature was pulled to Draenor from a distant corner of the universe, and the shockwave on its arrival ripped the earth asunder. Many draenei were killed and Auchindoun was blasted apart. Waves of destructive energy rolled out and leveled the surrounding forest.[4] Maladaar and a handful of his draenei used their magics to shield themselves from the blast. But though they survived, they no longer had the numbers to resist the Shadow Council. Teron'gor and his warlocks overwhelmed the draenei and bound them in chains, and contained Murmur deep within Auchindoun as well.[5]

Auchindoun is now in turmoil as different factions vie for power in this magical spot: Ethereals suck the arcane energy from the Mana Tombs, the Burning Legion harvests souls inside the Auchenai Crypts, arakkoa zealots work dark magic in the Sethekk Halls, and the Shadow Council plots its domination of Outland from within the Shadow Labyrinth.[6]

Imprisoned within the depths of the Shadow Labyrinth by the Shadow Council is Murmur, a powerful elemental similar to Ragnaros and Thunderaan, and the being who brought about the devastation of Auchindoun. He is the primordial essence of sound and constantly seeks to break free of his jailors and wreak havoc upon Outland. The Shadow Council has devoted much of their forces to controlling Murmur and harnessing his power for the Burning Legion.

For thousands of years,[n 1] the draenei have been interring their dead in Auchindoun, their most sacred temple. However, it was infiltrated by agents of the Shadow Council bent on summoning a horrifying creature of immense evil. Their vile act of magic resulted in a massive explosion that blew the temple apart and reduced the surrounding area into a charred wasteland. The blast also caused a rift in the Nether itself, drawing the otherworldly Ethereals into Outland. The interred draenei now walk the ruins as restless spirits. Meanwhile, the horrific entity summoned by the Shadow Council threatens to overwhelm their efforts to contain it. You must prevent this evil from being unleashed upon an unsuspecting world. Auchindoun is divided into four wings, and is designed for a party of five characters levels 64-70.[11]

Fortress Auchindoun was the main stronghold of the Bleeding Hollow clan on Draenor. A large army was sent from here to attack the Alliance Expedition base in the Hellfire Peninsula, but Alliance forces under the leadership of Turalyon and Danath Trollbane destroyed the fortress, forcing the army to retreat.

This part was apparently retconned. 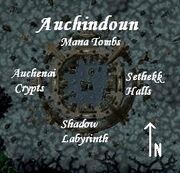 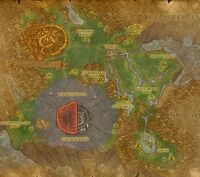 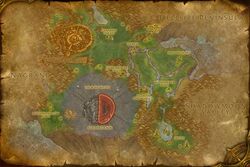