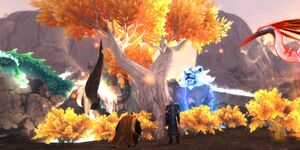 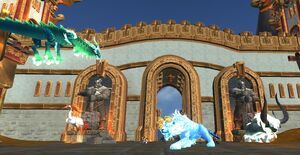 The August Celestials (also known as the August Ones[1] or simply the celestials)[2] are four powerful Wild Gods who dwell in and watch over Pandaria.[3][4] They consist of Chi-Ji, the Red Crane, Niuzao, the Black Ox, Xuen, the White Tiger, and Yu'lon, the Jade Serpent. 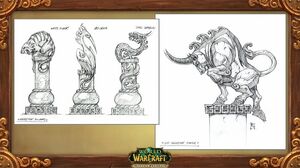 Much like the other Wild Gods, Chi-Ji, Niuzao, Xuen, and Yu'lon emerged from the great enclaves of life created by Freya during the ordering of Azeroth.[5] They were drawn to and gathered near the Vale of Eternal Blossoms, and Freya noticed that these four shared a deep commitment to peace and wisdom. She knew their compassion would aid the region well. One day, the Keeper came to the celestials with concern in her heart. There was a great darkness in the north, and she believed a confrontation was near. She gave them her staff for safekeeping. Freya never returned, and Yu'lon, the Jade Serpent, vowed to keep the staff safe.[6]

Under their care, many different life forms emerged near the Vale of Eternal Blossoms. Among them were the wise jinyu, the mischievous hozen, and the peaceful pandaren. They worshipped the August Celestials, and in return, the spirits offered them knowledge and guidance. For a time, there was peace.[7]

During the Age of a Hundred Kings, 15,000 years before the opening of the Dark Portal, numerous races settled in the lands surrounding the Vale of Eternal Blossoms. This emergence of life piqued the interest of the four Wild Gods, and though they were troubled by the mogu's constant warfare, they grew to enjoy watching the other races flourish. One race in particular, the wise pandaren, developed close ties with Xuen and his fellow Wild Gods due to their peaceful nature. Referring to the four Wild Gods as the "August Celestials", the pandaren developed a system of worship and philosophy centered around the powerful beings.[8]

After being crowned ruler of Pandaria, Emperor Shaohao received a prophecy from a Jinyu Waterspeaker that showed a disasterous future for the world. Shaohao then traveled to the four corners of Pandaria, receiving wisdom from each of the Celestials that would help him overcome his negative emotions, become one with the land, and save his people. He learned to conquer his doubt from Yu'lon, his despair from Chi-Ji, his fear from Niuzao, and his anger, violence, and hatred from Xuen. Believed to now be a being of complete harmony by all, including himself, he used his newfound power to withdraw Pandaria from the world before the Great Sundering could destroy it. However, even the Celestials did not know this was all the doing of the Sha of Pride, who cloaked Pandaria in mists, isolating it and ensuring a future of stagnation for all who lived within. The Celestials would continue doing their best to protect Pandaria from the mogu and mantid armies for 10,000 years before the Sha of Pride's mist would dissipate following the Cataclysm.

Several years later, when the final Old God N'Zoth was freed, the Vale of Eternal Blossoms came under assault by the Black Empire. All four August Celestials helped to defend the Vale.