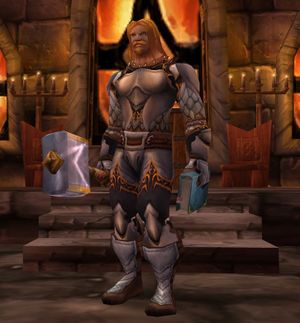 Aurius Rivendare is the lord of Stratholme. Formerly a paladin of the Silver Hand, he fell to the corruption of the Scourge and was raised into undeath as a death knight.[2]

Aurius was once a paladin of the Silver Hand, but his faith wavered in the face of the Scourge and he nearly fell into their ranks. He fled to Alonsus Chapel in Stratholme, believing that the chapel's consecrated ground would help stave off the Scourge's corruption.[3] When Blood Knights sought to extinguish the chapel's eternal flame, he defended it along with the ghosts of the paladins Aelmar the Vanquisher, Cathela the Seeker, Gregor the Justiciar, Vicar Hieronymus and Nemas the Arbiter.[4] 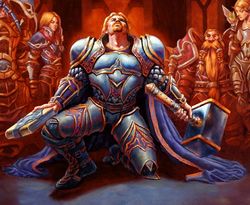 When adventurers entered Stratholme seeking to defeat his father, Baron Rivendare, he asked them to bring him the

[Medallion of Faith] to give him the strength to leave the chapel without succumbing to the Scourge. With it he was able to join them in battle against his father, but he suffered mortal wounds in the battle and perished.[3] Some time after Baron Rivendare left for Naxxramas, Aurius was raised as a death knight and took control of the city in his father's absence.[2] He was killed by adventurers sent by Eligor Dawnbringer.[5]

His body was then said to be placed in the crypt, but at the time of the Burning Legion's third invasion, when the Silver Hand entered Stratholme to obtain his steed, the paladins found that his body was gone and the steed was rode by Raemien the Soultaker.[6]

Given the fact that Shadowmane was ridden by a death knight, Aurius's body was very likely taken by the Scourge and his father.

TCG
"Before I submit to this impending death, there is one last thing I must do."[7]

It is good to see others who fight the Scourge in Stratholme, for it is here they are strongest.

Greetings. I am Aurius. I was once a paladin of the Silver Hand, but like others whose faith wavered... I fell from grace. The Scourge seduced me and nearly transformed me into a death knight!

Finally sensing my peril, I fled to this chapel. It is a sacred place where the first paladin, Uther the Lightbringer, was ordained into the order of the Silver Hand.

Leave me. My wounds are great and I fear they will overtake me. Thank you, <name>. I will die here, but because of you... I'll die in peace.

For his quotes as a boss in Stratholme, see Lord Aurius Rivendare.