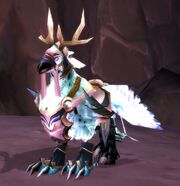 Aviana's Guardians are hippogryphs. They have two colorations, Argent (silver) and Gold. They are used in the quest chain that starts with

Since Aviana could not enter the Firelands due to her nature, she instructed her guardians to help adventurers with stopping the threat to Azeroth posed by the Twilight's Hammer cult.

Flight in the Firelands

The guardian only provides one power:

The mechanics for this mount were inspired by the classic arcade game Joust.

When you flap the wings, you both rise in the air and gain speed. When you do not flap, you begin to fall (at a steady but manageable rate). Thus you are always either rising, falling, or resting on (or moving across) a surface.

While on Aviana's Guardian, you can turn at will. Unlike mounted flight (on a normal flying mount, that is), the only way to gain altitude is by flapping, and the only way to lose altitude is by *not* flapping. Also, you cannot change your speed; you slow down naturally over time, unless you maintain your speed by flapping the mount's wings. Thus, stopping your mount is often a matter of skidding and hoping you don't fall off the far side of whatever it is you are landing on.