Witness the Awakening of Illidan Stormrage in Val'sharah.

Light's Heart is to serve as the vessel for Illidan Stormrage's rebirth: my last act of service to the Light.

But Illidan is dead and his soul is lost in the Nether. Before we may attempt to recover his soul, we must prepare the vessel for his return.

Across two worlds exist echoes of Illidan's past. You must venture out and find the echoes.

When our work is complete, I will be lost to the Great Dark.

An auspicious start to a life of tragedy. Perhaps one of the few joyous memories Illidan would have in his life. While the years that followed tested the prophesied child, they would never break him. You must remember that, despite what you may see as our journey continues.

There is much more to be done, but I am not yet ready. I will call for you when it is time.

Go to Lorlathil in Val'sharah. This will prompt a message from Xe'ra.

Xe'ra says: An ancient memory stirs. When you are prepared, call to me and together we will uncover a piece of Illidan's past.

Press the extra action button to see the cinematic. 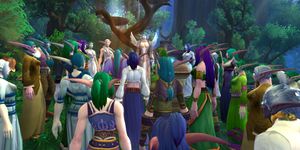 That's a lot of elves.

A crowd of night elves has assembled in Lorlathil around two cribs, presided by a lead Priestess of the Moon wearing the

[Raiment of Divine Clarity] set, and six more priestesses each wearing a

After the cinematic completes:

Xe'ra says: Illidan's was a life full of potential. His destiny forged in the great ordering and cast to the cosmic winds, where at last it would find a home on Azeroth. Within the tiny vessel the great cycle began anew.