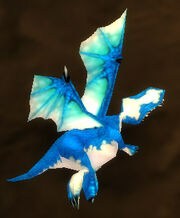 If a group of adventurers visits Upper Blackrock Spire, they will find a small room where two orcs are hurting a small blue wyrmling. After killing these orcs and saving the wyrmling, they will be able to listen to the dragon's story.

The young whelp is named Awbee, and is one of many wyrmlings stolen from their mother's clutch in far away Winterspring. The blues are not the only dragons that have been captured, however. Dragons from each flight are being captured to be used as guinea pigs in experimentation. These experiments have been ordered by Nefarian, whose goal is the creation of a chromatic dragonflight. The chromatic dragons he has managed to produce so far hold the abilities of all five dragonflights, and have been raised to be under the control of the black dragons. A large number of such creatures would be unstoppable.

According to Awbee, those subjects unsuitable for experimentation are given to the sadistic minions of Nefarian and Rend Blackhand to be destroyed. The unfortunate whelplings endure horrible torture at their hands before finally dying, either from being thrown into the lava or given to the denizens of Lower Blackrock Spire to be torn apart. At the time the party finds Awbee, the orcs are getting ready to do just that.

Awbee is grateful to those in the party and will want to make sure that the blue dragonflight knows what Nefarian is up to. To this end, Awbee gave the rescuers a scale. If it is used in the proper place, they will be teleported to the blue dragonflight's matron mother, Haleh, who will be able to scry what Awbee has seen and felt when the adventurers hand over the scale to her.

Awbee eventually recovered enough to leave the mountain. Years later, Awbee grew up into an adult dragon and in gratitude, returned to the mountain in order to aid the rescuer during the fight against Commander Tharbek.

You will be ok, Awbee. Your assailants have been terminated.

The dragon riders came in the night, mounted atop the black flight. They struck fast and with deadly precision, taking young whelps - such as me - and escaping under the veil of darkness.

I watched in horror as they used my brothers and sisters in their expermients. From our essence would be created the chromatic flight.

Nefarian had ordered that unsuitable subjects be destroyed immediately, but these retched beasts would not do so without first inflicting an 'ample' amount of torture.

When we were thoroughly 'broken,' they would round up what remained and throw us to these thugs. Our bodies used as instruments in their sick game: thrown into the lava or worse; to the open and waiting arms of the bloodthirsty legion below.

You came along just as they were about to throw me to the fiends below - for that, I thank you. Perhaps, I - rather - we, of the blue flight, can assist you further?

You have come this far, <race>, risked much. Will you go a ways further to battle Nefarian and his legion of Blackrock?

You saved my life once, it is about time I returned the favor!