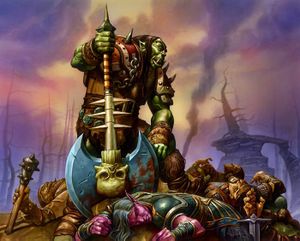 An orc wielding a

An axe (or ax) is a one-handed or two-handed, edged weapon usually constructed of a short, broad blade attached to a pole. The form of the blade varies widely, and the pole is usually short though some possess a longer one like a polearm, for example:

Both one-handed and two handed axes can be wielded by death knights, paladins, shaman, and warriors. Rogues and monks can wield one-handed axes. Hunters can also wield both types of axes, but are unable to use ranged attacks while wielding them.

The orc race has both the One- Handed Axe and Two-Handed Axe specializations, which now gives 5 additional Expertise points with these weapons.