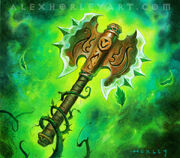 The Axe of Cenarius in the World of Warcraft Trading Card Game. 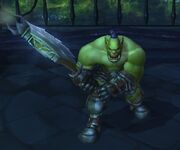 Broxigar wielding the axe in a flashback to the War of the Ancients in World of Warcraft: Legion.

The Axe of Cenarius[1] (referred to as Brox's axe) is a two-handed, magical wooden axe crafted by Malfurion Stormrage, under the direction of the demigod Cenarius, during the War of the Ancients. It was made specifically for the orc Broxigar, and he described it as being like an extension of his own arm. Created using druidic magic, the axe was enchanted with a piece of Kalimdor's magic, making it light as a feather and stronger than any mortal-forged axe. It proved to be able to slice through any foe with ease.

Near the end of the war, Broxigar dived into the portal over the Well of Eternity and used the axe to wound Sargeras on Argus. Although not a very deep wound, it would later be the focus of Krasus and his allies' spellwork, that for a second, tore Sargeras' attention away from his struggle to keep the portal open... allowing Malfurion and Illidan to close it upon him. Miraculously, the axe somehow made it back to Azeroth, survived both the Sundering and Broxigar's sacrifice, and washed up on the shore of Kalimdor where it was found by Rhonin.

Rhonin and Krasus insisted that the axe be brought back to their time period, and Nozdormu allowed this. After returning to the present, Korialstrasz, in the shape of an old orc, brought the axe to Thrall and told him of its history. Thrall promised to honor it and Brox's sacrifice.[2]

In time, Broxigar's niece Thura grew up to warrior age and after proving her skills, Thrall gifted her with the axe, of which Thrall's most trusted shaman had seen in a dream that it should go to her. She felt honored to wield such a fabled weapon.

A trapped Malfurion contacted Thura in her dreams and manipulated her to enter the Emerald Nightmare. Malfurion had been transformed into a tree by the Nightmare Lord Xavius and intended on using the Axe of Cenarius to break free of the transformation, as it was the only thing that could do so.[3]