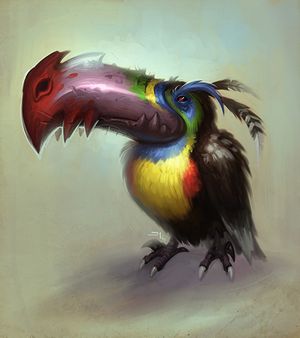 Axebeaks (previously known as toucans) are birds native to Draenor and Azeroth. They can mainly be found in Tanaan Jungle and the jungle areas of Gorgrond. They appear to be omnivorous, as Bloodthirsty Axebeaks can be seen eating off of the corpses of dead Bleeding Hollow Savages in Tanaan.

The edges of their beaks are particularly sharp.[1] The colorful plumage from the junglebeaks are highly sought after by collectors. It is rumored that wearing these feathers will bring you good luck.[2] The ancient tribes of Draenor were known to harvest the bloodbeaks' sharp beaks for crude tools and weapons.[3]