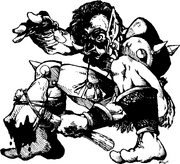 Axethrowers (also spelled axe throwers) are quite simply units that throw axes. Like spear-throwing, this is an activity favored by the various troll tribes. Through a combination of learning how to channel their rage and alchemical means, troll axethrowers can become known as berserkers.

The trolls of Lordaeron had suffered ages of attrition at the hands of the humans, dwarves, and elves. The appearance of the Orcish Horde had given them the opportunity to ally themselves with kindred spirits with whom they could seek revenge upon their many enemies. More agile than the brutish orcs, trolls employed throwing axes - along with a cunning attack and retreat stratagem - to assail their foes. This combination of speed, range and the ability to bring down threats from above made them a valuable addition to the Orcish Horde.[1]