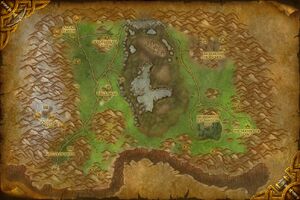 [Potent Murloc Pheromones] on him.

Those gnolls and murlocs are liable to be meetin' out there somewhere. So you take this clever plant disguise of mine, and you wear it and look like a plant. Then you sneak up on 'em, and you throw this scent pheromone you gathered on the mosshide standin' with the murlocs.

Then the murlocs'll flip their spit, and the mosshides will think twice about trying to work with such crazy lil' buggers!

Well don't just stand here like some kinda idiot! Get out there and act like a plant!

Worked like a charm, didn't it? Maybe Kadrell will get off my darn back now what with savin' the whole town and all!

I suppose you've done earned yourself some proper goods.

Open up Cannary's Cache to receive one

[Skin of Dwarven Stout], a

[Clever Plant Disguise Kit] and some

[Potent Murloc Pheromones]. Head back to the south end of what's left of the loch. Get close, but not too close, and use the disguise kit. It, well, works as advertised. Players are wearing some sort of plant. Creep a little closer listen to the Mosshide Representative's plan:

Mosshide Representative says: With your strength, murlocs, our plan will succeed. Our kobold friends will mine us plenty of ore...
Mosshide says: And, armed with gnoll-forged weapons of indestructible copper, you murlocs will be unstoppable!

Ack! This cannot be tolerated.

Use the pheromones on the gnoll:

The next quest is offered by Jern Hornhelm in the Explorers' League building a few buildings east of Stoutlager Inn.

"Aaagh! Curse your sudden but inevitable betrayal!" is a line from the science-fiction series Firefly. It is heard in a scene early in the pilot episode, where Wash is playing with his toy dinosaurs.

[10] Reinforcements for Loch Modan or

Valley of Kings and Thelsamar