“To live the way of the Tushui is to be respected both for tempered mind and impeccable form.”

Aysa Cloudsinger is a pandaren and a master follower of the path of Tushui, which believes in living a venerable life through meditation, rigorous training, and moral conviction. She has attained impeccable form and a refined intellect through diligent practice. To Aysa, to follow the way of Tushui and to practice patience, is key to defending what is right. She believes that success in any endeavor never justifies dishonorable deeds. While the Alliance contains a diverse mix of cultures, Aysa is attracted to the high ideals and values that cement the Alliance together.[2]

After the Wandering Isle, Aysa can be found as a monk trainer near the Eastern Earthshrine, where her pandaren contingent have set up a permanent camp between the two waterfalls above Olivia's Pond.

Aysa met Li Li Stormstout when Chen's niece was running after Shu to Wu-Song Village but had lost his trail. Aysa advised her to find him by a method of Tushui.[3]

Aysa and Ji Firepaw met the pandaren adventurers sent by Master Shang Xi in an effort to recover the four elemental spirits of the Wandering Isle. After recovering Huo, Aysa sent the adventurers to help Ji wake Wugou. She realized that Dafeng had been driven into hiding by Zhao-Ren, and that he must be killed in order to ease Dafeng's fears. When the elemental spirits were recovered, the pandaren discovered that the pain of Shen-zin Su was a thorn - The Skyseeker. Aysa opposed Ji's plan to blow up what was left of the Skyseeker. With the battle between the Horde and the Alliance affecting their land, Aysa chose to join the Alliance. To prove her strength, she fought against the King of the Alliance, Varian Wrynn.[4]

Aysa took part in the Siege of Orgrimmar, hoping to rescue Ji Firepaw from the carnage. Ji had been beaten unconscious by the Kor'kron and was slated for execution, though Aysa helped fight off the orcs and rescued Ji from his predicament. Begging him to live, Aysa promised that the two of them could return to the turtle and be together.

Aysa served as a liaison for the factions and Taran Zhu during the trial of Garrosh Hellscream, such as directing them to their appropriate seats. When asked she told Jaina Proudmoore and some of the other Alliance leaders that Ji was all right after the events of the Siege of Orgrimmar.[5]

Aysa and Ji teaching a class together.

Aysa attends the funeral of Varian Wrynn, saying that he was a man who overcame many trials and that they all can all learn from his example.[6]

True to Aysa's words at the Siege of Orgrimmar, she and Ji returned to the Wandering Isle. They can be found in Mandori Village after the isle becomes the monk Order Hall, teaching monk trainees together.

When an Alliance player reaches Prestige Rank 2, Aysa can be found in Stormwind Keep alongside other notable leaders of the Alliance. During

[100] A Royal Audience, she is present at the ceremony hosted by King Anduin Wrynn that congratulates the character for their battles against the Horde, following their receiving of the 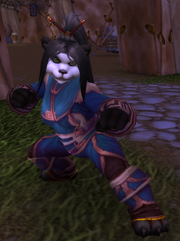 Aysa is one of the Alliance leaders found in the Stormwind Embassy, expressing "great respect" for Anduin but noting that his father Varian was a more capable sparring partner. She is later found meditating at the bow of the Wind's Redemption in Boralus, and says that she is not surprised that Jaina returned to Kul Tiras, for the greatest healing can only be found in the greatest wounds.

Aysa was later present on the Kul Tiran vessel in Stormwind Harbor with the other Alliance leaders to witness the Kul Tirans gifting the vessel to Anduin and rejoining the Alliance.[7]

During the battle at the Gates of Orgrimmar, Aysa and Ji came to Thunder Bluff to defend it and Baine Bloodhoof from a potential attack from Sylvanas Windrunner.

Following the fall of N'Zoth, Aysa was present at Stormwind Embassy meeting where she learned that the armistice, ending the Fourth War between the Horde and Alliance, was signed.[8] 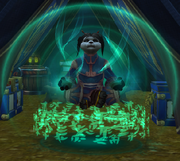 Aysa meditating near the Eastern Earthshrine.

Shu is precious to us. We need to find him, but he has the tendencies of a young child, so we must not scare him in our approach. I will meditate on where he might be, and how best to reach out to him. Be patient, my friend.

Be patient with Shu. He acts as if a child, but he is quite ancient, and quite powerful.

I understand that the mind of the Tushui is not the only path to wisdom, but there are yet choices that should not be accepted. Risks that are too dangerous to ever be taken. Decisions that I cannot forgive…

It is time for me to leave Shen-zin Su. I have found respect for Delora Lionheart for her confidence and valor, and her tales of the Alliance speak well of her people. I do not yet know if I will find a home there, but wherever my path may lead, I will find a way to help the world beyond this isle.

Despite everything, I've enjoyed what little time we've had together, <name>. I hope that you might join me, but I understand that this decision is not an easy one.

This city is so unlike anything from home...

Ah, friend, how may I help you?

It seems like only yesterday that those of us who follow the way of the Tushui pledged to fight for the Alliance.

Though I have great respect for King Anduin, I must confess that I found his father a more capable sparring partner.

Please do not tell him this.

I'm more than happy to help the Alliance find new allies. My first steps into Stormwind were quite daunting, but now I consider it a home.

I am not surprised that Jaina Proudmoore has chosen to return home.

A wound untreated can never heal. And her wound is grave indeed.