Not to be confused with Azsharite or Azurite. 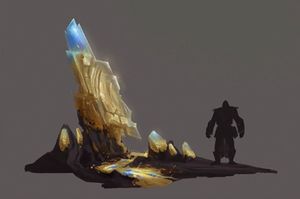 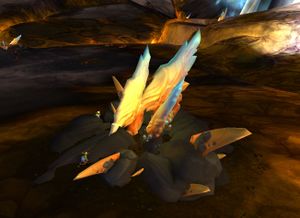 Azerite is the name given to the crystallized blood of Azeroth. When Sargeras stabbed the world with his sword, it caused her to bleed her life essence all over the world. The Alliance and the Horde are now fighting over it.[2] Magni Bronzebeard gave an adventurer the

[Heart of Azeroth], a relic from Azeroth herself that allows the bearer to consume the Azerite and through it, heal Azeroth.

Island Expeditions serve as the main source for Azerite, with maps for them provided by the gnomes and goblins.[2]

Long ago, Aman'Thul, the Highfather of the titan Pantheon, ripped the Old God Y'Shaarj from the world's crust and tore it apart. The volatile arcane lifeblood of Azeroth's world-soul rushed to the surface and roiled over the world. It was through this event that the Pantheon realized that the Old Gods had embedded themselves too deep in Azeroth's surface to remove without severely harming the world-soul, and so they instead resolved to imprison the vile entities below the surface of the world. After the Old Gods and their elemental minions had been defeated and sealed in their prisons, the titans' most powerful servants — the keepers — set to work to seal the still-bleeding wound. After having labored day and night to construct magic wards around the wound, the tumultuous arcane energies eventually calmed and settled into balance, and the keepers named it the Well of Eternity.[3]

On Kezan before the Cataclysm, the Bilgewater Cartel dug deep enough into the earth that they were able to find and mine a small vein of Azeroth's blood. Jastor Gallywix fashioned it into the orb on his cane. He believes there is a possibility that this mining operation bears partial responsibility for the eruption of Mount Kajaro, and it may not have been solely the fault of the Cataclysm.[4]

After Sargeras stabbed Azeroth in Silithus, Azeroth began to bleed out across the world. The Alliance and Horde saw Azerite's potential as a power source and began to fight over it, while Magni Bronzebeard tasked an adventurer with gathering the blood and returning it to the world-soul to heal her. 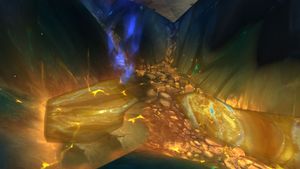 Azerite comes in two forms: fluid and hardened chunks. It is liquid when it bleeds from the earth and only solidifies when exposed to air.[18] It is surprisingly light in its solid form[19] and once hardened, it cannot be broken by swords, hammers, goblin shredders, or the energy pulse from the Crunchola.[19] Armor constructed out of Azerite survived three minutes of bombardment from Sapphronetta's Lightning Blast 3000 with only a slight melting of the metal.[19] Azerite's coloration is a combination of icy blue[20] and a golden color similar to honey[20] or amber.[4]

The Azerite sample that the Bilgewater Cartel found below Kezan before the Cataclysm was originally gold and liquid, but when exposed to air it solidified, gradually lost its amazing properties, and changed color to become as red as a drop of human blood. However, when Sargeras struck Azeroth and new Azerite began flowing to the surface, the old Azerite sample turned back to gold and regained its previous characteristics.[4][21]

Despite its destructive potential, Sapphronetta believes that Azerite's natural state is ultimately toward growth and healing.[30]


Below is a list of locations that the Azerite appeared naturally, in liquid or solid state by an eruption in the land or as scars.

Some creatures can also be infused with azerite, such as shale spiders (Azerite Skitterer) or earthen like the Earthen Guardians. An Azerite Leviathan kraken was also seen.