Azeroth Choppers is an eight episode web-series combining Warcraft and American Chopper. The promotion consists of two teams representing the Alliance and the Horde, with each team designing and building a motorcycle for their faction. The motorcycle with the most votes will be added to World of Warcraft as a free faction-specific mount usable by all characters of that faction.[1] In the final episode, Michael Morhaime announced that the winning bike would be going into the Warlords of Draenor expansion. 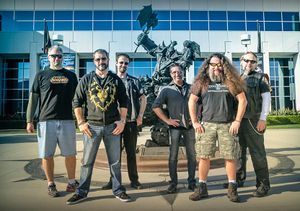 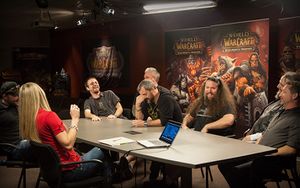 In episode 4, Blizzard sent two employees to set up six game machines at Paul Jr. Designs. The build teams got to roll some new level 90s, try out their abilities on combat dummies set outside Stormstout Brewery, try the dungeon, and 3on3 PvP in Tol'Viron Arena. The two employees and Terran, back at Blizzard, helped fill out groups as necessary.

The winning bike was given away for free in-game.[1] On July 24, 2014, it was announced that anyone who logged in to the game between then and September 30, 2014 would automatically have their account flagged to receive the Horde chopper, the

[Warlord's Deathwheel], upon the release of Warlords of Draenor, when it would be made available to all Horde characters.[2]

On August 1, 2014, Blizzard announced that the Alliance chopper would also be added to the game, due to popular demand (and a few shady back-alley deals in Stormwind's Old Town). Sometime after Warlords of Draenor launched, the bike would be available from a vendor for "a pretty hefty sum of gold".[3] Bashiok later stated via Twitter that the price would be "something closer to the Mammoth-end of mount costs".[4] Following the launch of the expansion, the

[Champion's Treadblade] was added into the game and is available from Paulie in Stormwind at a cost of 100,000