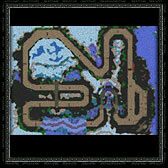 Legends speak of a hidden race track north of the border where representatives from the far reaches of the land gather to test their skills and racing prowess. This event is known to break even the mightiest of combatants with its no-rules-barred arena.[1]

The Azeroth Grand Prix is a racing event held somewhere in Azeroth.

Racers could limit the other racers in a variety of ways. Racers shot bullets at racers in their front. There were also various present boxes on the track that held advantageous items. One item made the racer's exhaust spew fire. Another set a landmine. Another made the racer ethereal, limiting damage on him. Another shot a frost cloud in front of the racer.

This could be the Mirage Raceway located in the Thousand Needles, although it is not clear what "north of the border" refers to.