Azgalor is an annihilan best known for his participation during the Battle of Mount Hyjal. 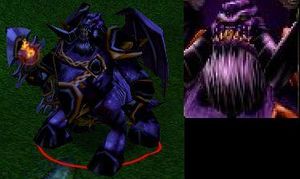 Following his Mannoroth's death, Azgalor accompanied Archimonde as he made his ascension up Mount Hyjal towards Nordrassil, the World Tree. After various attacks, Azgalor invaded but was repelled; after some time he began to attack alongside Rage Winterchill but was still held back.[2] During the battle he attacked the human base with undead and demons in his army; he managed to separate a small force led by Broll Bearmantle from the main army as he and other powerful demons were attracted by the Idol of Remulos. Though Broll called to the deep earth to protect his force so that they could reintegrate to the rest of the army, in the end the pit lord overwhelmed him. As Broll fell, Azgalor used his two-bladed sword, Spite, to smash the Idol of Remulos, corrupting it and killing Broll's daughter, Anessa.[3] But just as Azgalor and the Burning Legion thought they had achieved victory, Malfurion set loose his wisps which imploded the Tree and incinerated Archimonde.[2]

It is presumed he was killed during the battle or after Archimonde's defeat. 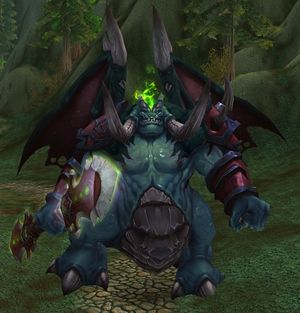 Azgalor in The Burning Crusade.

Adventurers of the Horde and Alliance entered a time pocket of the Battle for Mount Hyjal.[4] Here it is seen that after dealing with the Alliance base and Broll Bearmantle, Azgalor ascended to the orc base. There he fought Thrall, troops of the Third War, and adventurers from the future, and was killed in the battle.

Azgalor returned with Archimonde to Draenor and was seen in Hellfire Citadel. He was defeated by the adventurers of the Horde and Alliance. 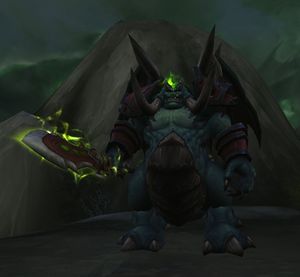 Azgalor makes a quick recovery in the Twisting Nether to return during the Battle for Broken Shore. He's been promoted to Fel Commander and is the Horde counterpart of Dread Commander Arganoth. 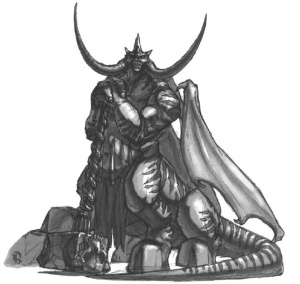 Azgalor was once the lieutenant to the mighty demon-king Mannoroth. Following Mannoroth's death at the hands of the orc Grom Hellscream, Azgalor took it upon himself to direct the Burning Legion's ground forces at the Battle of Mount Hyjal. Though he isn't as clever as his former master, he has an aptitude for chaos and violence that is legendary even among demonkind.[5] Though the Legion was defeated that day and Azgalor seemingly vanquished, he escaped into the Twisting Nether to plot his revenge against the mortal armies of the world, seeking to destroy all life on Azeroth by employing whatever forces he could utilize.[5]