This article is about Azshara's palace in pre-Sundering Zin-Azshari. For the raid in Nazjatar, see Eternal Palace. 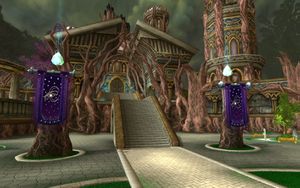 The palace as depicted in the Well of Eternity dungeon. 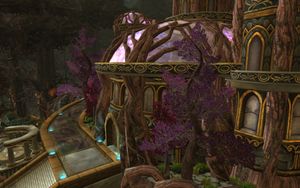 Azshara's Palace was the palace of Queen Azshara.[1] Azshara, the night elves' beautiful and gifted queen, built an immense, wondrous palace on the Well of Eternity's shore that housed her favored servitors within its bejeweled halls.[2]

The palace was located in the capital of the Kaldorei Empire, Zin-Azshari, and was built on the very shore of the Well of Eternity itself, the source of power and efficacy for the Kaldorei race. The palace served as the residence for both the queen and her closest followers - the Highborne - who collectively presided over and ruled the empire. During the later years of the empire, just before and during the infamous War of the Ancients, the palace became home to a large host of demonic invaders as powerful spell-work was conducted within its walls to summon the demon lord Sargeras and his legion to Azeroth. At the war's violent conclusion, the palace, the city, and the entire continent, were torn apart by the Great Sundering, with the palace itself sinking beneath the waves.

The palace rested on a cliff overlooking the Well of Eternity. When first the vast, walled edifice had been constructed, using magic that melded both stone and forest into a single, cohesive form, it had been a wonder to touch the heart of any who saw it. Its towers were trees strengthened by rock, with jutting spires and high, open windows. The walls were volcanic stone raised up, then bound tightly by draping vines and giant roots. The main palace at the center had originally by the mystical binding of more than a hundred giant, ancient trees. Bent in together, they had formed the skeleton of the rounded center, over which the stone and vines had been set.[3]

In the highest tower, Xavius and the other Highborne studied the powers of the Well of Eternity.[4] That tower was destroyed by Malfurion, temporarily closing the Burning Legion's portal.[5]

Azshara's Palace features prominently in the Well of Eternity instance. The Courtyard of Lights surrounds it. Its design somewhat resembles the Temple of the Moon in Darnassus. A glass walkway goes around it towards a platform where Queen Azshara, and the highborne who are casting the spell to summon Sargeras, can be fought. It contains several inaccessible sections, both inside and out.