For the quest in pre-Cataclysm Azshara, see

[58G] Azsharite.
Not to be confused with 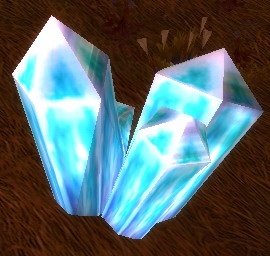 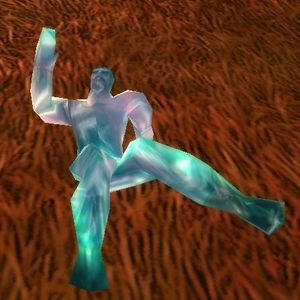 A human turned into azsharite after being eaten by a mountain giant.

Azsharite is the name given by mortals[1] to a highly malleable and extremely strong type of blue crystal formed from mountain giant excrement, found exclusively in the southern reaches of Azshara in northeastern Kalimdor. Fragments of the substance are rarely recovered due to the extremely violent nature of the giants.[2] In addition to being extremely strong and having uses in the forging of weapons of fel power, azsharite is capable of focusing enormous amounts of energy.[3] Assistant Greely calls it "the rarest substance on the planet",[3] but this may or may not be a slightly hyperbolic statement.

A healthy giant normally eats three square meals — mainly consisting of rocks and earth — every decade and only tends to defecate every 15 to 25 years, barring any "tummy trouble". However, they are also known to eat "squishlings" that aggravate them, and some giants use the bones of mortals as a form of seasoning.[1] Animals and humanoids that are devoured by the giants slowly crystallize inside the giant's belly until they completely transform into crystalline statues.[4]

Due to the valuable properties of the crystal, the goblins of the Bilgewater Cartel have recently gained an interest in azsharite. Assistant Greely even goes so far as to say that the substance "may be the biggest goblin discovery since kaja'mite".[3]