“One of the amusingly convenient things about evil and destruction is that they tend to just evilly destruct each other eventually.”

Azuregos (pronounced AZ-yuhr-gohs)[1] is a powerful blue dragon who was trusted by Malygos with the safekeeping of the blue dragonflight's most precious artifacts. He, like Nefarian, has a sense of humor. 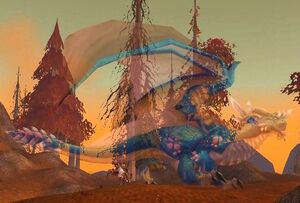 Sometime after the Great Sundering, the blue dragonflight arrived to Azshara and took to safeguarding the powerful artifacts and magical lore within the ruins of Eldarath, for countless generations. At an unknown point in time, Azuregos would arrive to Azshara, which caused rumors that suggested that items of extreme significance, perhaps the fabled Vials of Eternity themselves, may have been found in the wilderness of Azshara. Whatever Azuregos sought, one thing was certain: he would fight to the death to defend Azshara's magical treasures, and to that end he could be found in southeastern Azshara guarding the ancient night elf Ruins of Eldarath.[2]

The Scepter of the Shifting Sands

During the War of the Shifting Sands, a scepter was created to make it possible to reopen the Scarab Wall. The scepter was shattered however by Fandral Staghelm, and the shards were divided amongst the four mighty Dragonflights, in the hopes that it would be nearly impossible to reunite the pieces by anyone seeking to unleash the horrors of Ahn'Qiraj. Anachronos kept one piece to himself and gave the others to Eranikus, Vaelastrasz, and Azuregos.

As soon as Malygos charged him with protecting the scepter shard, Azuregos knew he was in for an eternity of headache and pain. All he wanted to do was study the magic rich shorelines of Azshara and take in what artifacts might remain from the Great Sundering. He held the scepter shard for 500 years and he thought it was nothing but trouble. It attracted all kinds of attention. He wanted to be left alone to his studies, not babysit some would-be hero's ticket to glory. So he gave it to a very special minnow, Maws. Any champion seeking to reunite the Scepter would come searching for Azuregos and face quite a challenge in order to claim the shard. 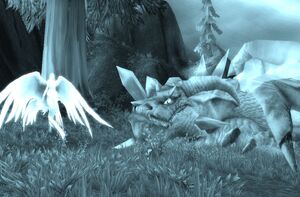 After the death of Malygos, Deathwing sent agents to assassinate the rest of the weakened blue flight. Azuregos has not been seen since a group of bloodthirsty adventurers came through on some sort of quest to make a now-useless quiver. While no one knows where he has gone, there is someone in Bilgewater Harbor paying handsomely for information on his whereabouts.

Eventually, it is discovered that he is hiding in the spirit world, and appears to be in a relationship with a Spirit Healer, Anara. He eventually agrees to help Kalecgos fight the black dragonflight,[3] but strongly disapproves of Kalecgos becoming the new Aspect of Magic.[4]

After Azuregos aided Kalec in defeating Malicion and Twilight Lord Katrana, they departed Azshara and wanted to remain discreet for a while.[5]

Because the star-crossed lover was unable to prevent Kalecgos from becoming the next Aspect of the blue dragonflight, we suspect we'll find Azuregos deep in the throes of yet another impossible romance. Sorry, Anara. It's not you; it's him.[6]

Azuregos in his elven form.

Azuregos returned to the now-abandoned Nexus to secure the magical artifacts contained within the vault, but was captured by the Ethereum which had taken up residence.[7] Bound by ethereal void energies, he was freed by the Conjuror of the Tirisgarde at Kalecgos's behest and together they took down Nexus-Prince Bilaal. Azuregos stayed behind to secure the Nexus so it will not fall into the wrong hands again, giving his regards to Kalecgos.[8]

He only appears in phasing events. After the quest

[19] Wasn't It Obvious?, he appears temporarily in a phased version of the zone as the Spirit of Azuregos. After

[19] Turning the Tables, he appears permanently at the Northern Rocketway Terminus.

My watch is eternal, mortal.

Scepter of the Shifting Sands

[The Scepter of the Shifting Sands], he or she may speak to the Spirit of Azuregos in a comical gossip text that leads the player towards finding the shard of the blue flight:

You seek the scepter shard charged to the protection of the Blue Flight?

<Azuregos appears to be smiling.>

How did you know? I mean, yes... Yes I am looking for that shard. Do you have it?

Of course I do not have the shard. That would be asinine. I walk amongst savages in this cursed land! I cannot take five steps without some crazed orc or human trying to thrust a sharp stick into my hide. At any given time you could very well be speaking to my ghostly spirit.

You are going to love this story, <race>. See, here is the thing. As soon as Malygos charged me with protecting the scepter shard, I knew I was in for an eternity of headache and pain.

All I want to do is study these magic rich shorelines and take in what artifacts might remain from the Sundering. You know, there was once a thriving Highborne civilization here! You don't have to tell me that there is going to be some solid magical items around here, <race>. I can smell it!

By Bronzebeard's... um, beard! What are you talking about?

As I was saying, I held on to that scepter shard for a good five-hundred years and it was nothing but trouble. It attracted all kinds of attention - the wrong kind of attention. I want to be left alone to my studies not babysit some would be hero's ticket to glory. So... I gave it to the fish.

Fish? You gave a piece of what could be the key to saving all life on Kalimdor to a fish?

Not just any fish, mortal. This fish was a minnow. A very special minnow.

A minnow? The oceans are filled with minnows! There could be a hundred million million minnows out there!

Genius, I know... It will never be found; but, in case it is found, I gave the minnow some special powers.

You put the piece on a minnow and placed the minnow somewhere in the waters of the sea between here and the Eastern Kingdoms? And this minnow has special powers?

Correct. You've been listening! This minnow is really quite a terrible creature to of my own creation. When I am relaxing I like to think of the unlucky fishermen who have run into this minnow and been devoured whole. I bet they were quite surprised!

Genius is often misunderstood, <race>. Now, about the scepter shard... If you want that shard and do not wish to spend the next ten thousand years searching for it, you are going to have to listen very carefully.

Right then... You have to build an arcanite buoy and place it in the ocean. My minnow will be attracted to the magical emanations. When he gets near the buoy - BLAMMO! It will explode in a glorious pulse of arcane energy, revealing the minnow's true form. Also, you may or may not incur the wrath of Neptulon. A 50/50 chance I would say.

Ok, let me get this straight. You put the scepter entrusted to your Flight by Anachronos on a minnow of your own making and now you expect me to build an... an arcanite buoy or something... to force your minnow out of hiding? AND potentially incur the wrath of an Elemental Lord? Did I miss anything? Perhaps I am to do this without any clothes on, during a solar eclipse, on a leap year?

If I did not know better I would think that you were mocking me, mortal; but yes, that is mostly correct. You may remain fully clothed.

FINE! And how, dare I ask, am I supposed to acquire an arcanite buoy?

Take this ledger to an old acquaintance of mine in Tanaris. His name is Narain Soothfancy - terrible, terrible psychic but an amazing engineer! He should be able to make sense of it all.

Azuregos says: I said GOOD DAY! (At this point the interaction-window with Azuregos will automatically be closed.)

If the player further interacts with Azuregos, he will ask:

Shouldn't you be saving the world?