Azuregos was a world boss found in southeastern Azshara. The blue dragon Azuregos is a trusted servant of the aspect Malygos. As a blue dragon he is incredibly interested in magical artifacts and their protection. For this reason he guarded the ancient night elf Ruins of Eldarath, in modern day Azshara.

[WoW's 13th Anniversary], Azuregos is available during the anniversary event.

From the official "Raid Areas" article:

Before the Great Sundering, the night elf city of Eldarath flourished in the land that is now known as Azshara. It is believed that many ancient and powerful Highborne artifacts may be found among the ruins of the once-mighty stronghold. For countless generations, the Blue Dragon Flight has safeguarded powerful artifacts and magical lore, ensuring that they do not fall into mortal hands. The presence of Azuregos, the blue dragon, seems to suggest that items of extreme significance, perhaps the fabled Vials of Eternity themselves, may be found in the wilderness of Azshara. Whatever Azuregos seeks, one thing is certain: he will fight to the death to defend Azshara's magical treasures.

Azuregos is immune to arcane spells and is very frost-resistant. His powers include: 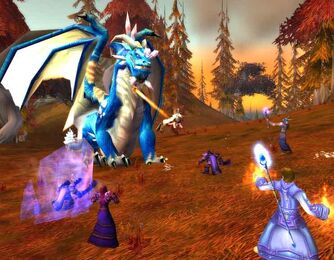 Once Azuregos has been aggroed, all the DPS and healers stand at his sides within teleport range. Melee attack on his sides to avoid his breath and other frontal attacks. The MT keeps Azuregos facing parallel to the dps/heal groups. A few healers keep the MT(s) up while the other concentrate on keeping everyone up.

It is key for everyone to be in teleport range when the teleport happens, as this clears his aggro. Each time a teleport occurs everyone runs back to their side positions. ALL DPS AND HEALING must STOP until the MT has aggro again; it is usually sufficient to give the MT 5 seconds before the rest of the raid unloads. DPS resumes until the teleport happens again. Obviously use potions and bandages as necessary after teleports. Rinse and repeat until Azuregos goes down.

If any casters need to drink, wait until the next teleport and then run away from the raid. Otherwise you will be the only person on Azuregos' aggro table and he will come after you.

Mages should keep themselves buffed with

[Frost Ward] and use

[Scorch]. Fireballs are not allowed, for three reasons: 1) When the magic shield goes up, it hurts a lot less 2) The scorch debuff does not stack up like the fireball one does 3) Quick casting time lets you get more in between teleports.

This fight is mana intensive. Curse of Elements and Judgement of Wisdom should be on the dragon at all times. If you have any Shamans, mana spring and mana tide should be up whenever possible.

There is no legitimate means to remove Mark of Frost.

Azuregos can once again be soloed by a hunter (3.0.3) and possibly any class that can out-heal the damage. Where it once took hours now just takes less than thirty minutes to accomplish. Azuregos can be soloed in under 10 minutes. This video documents a Death Knight (3.2) out-healing the DPS output of this boss.