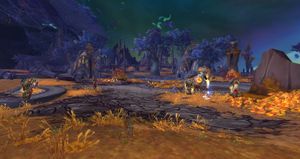 Azurelight Square is an open air location in southern Mac'Aree, between the Ruins of Oronaar and the Conservatory of the Arcane. It features eredar architecture, however it is now mostly deserted apart from ghosts. There is a concentration of ruined houses in the east of the area. Powerful Argussian Vigilants, as well as smaller Ancient Argus Constructs patrol this region. The wildlife is represented by numerous talbuks and mana rays.

It was likely known as (or contained) the Azurelight Bazaar, a thriving marketplace[1] with all manner of ancient treasure.[2]