Azuremyst Isle is one of the two main islands that make up the Azuremyst Isles. Remaining mostly untouched by sapient races until recently, the land has changed a great deal due to the recent crash of a draenei inter-dimensional generation ship. Powerful and ominous crystals dot the lands, and energy storms ripple through the sky. The draenei capital city, The Exodar, is built around their crashed ship in the western part of Azuremyst Isle.

Evidence that parts of the crashed ship are tainting and mutating the natural flora and fauna of the island has become apparent. The draenei are working to halt and if possible reverse these mutations as soon as possible, to restore the natural beauty and health of the island.

Azuremyst Isle, one of WoW's starting zones, sees the least amount of PvP action (along with Teldrassil) due to the fact that the only way for Horde players to get to Azuremyst Isle itself is via ship from Rut'theran Village in Teldrassil. Other starting zones are directly accessible by the opposing faction without such hazards. For this reason, some draenei on PvP servers leave for the human and dwarven starting zones. 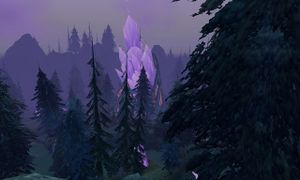 Very little history is known of Azuremyst Isle and the surrounding islands. The night elves once populated the isles in large numbers. Ancient night elven ruins predating the Sundering are found scattered about both Azuremyst and Bloodmyst, most of them now inhabited by vile naga. The remains of an elvish city can be seen at what is now Wrathscale Point on southwestern Azuremyst.[1] When the draenei arrived, the night elves had mostly abandoned these islands in favor of mainland Kalimdor. On the southern Silvermyst Isle, a dock and house of night elf architecture marks the dwelling of a family of night elves who made their home here. This settlement was later destroyed by deranged moonkin and murlocs. Valaar's Berth is a small harbor operated by the night elves, connecting Azuremyst Isle to the mainland of Kalimdor.

Not visited often by the night elves and tauren of Kalimdor due to their out-of-the-way location, the isles' indigenous creatures have been left to their own devices over the centuries. Several tribes of furbolgs live on island, including the Bristlelimb and the Stillpine. Due to being so far removed from their cousins in Kalimdor, some of these furbolgs have remained uncorrupted, though they have recently been driven out of their ancestral holdings. Owlbeasts inhabit the eastern Ammen Vale, as well as Silvermyst Isle. Siltfin murlocs inhabit the western shores of both Azuremyst and Silvermyst isles.

The island suffered extensive damage during the crash landing of the Exodar, affecting and mutating its wildlife. By the time of the Cataclysm, however, the draenei had mostly reverted the damage. It was also not heavily affected by the Cataclysm itself.[2] Thousands of the draenei have settled on the Azuremyst Isles.[3]

After the Cataclysm, rumors had spread that the draenei withstood the breaking of the world, and that refuge could be found on Azuremyst Isle. Human refugees arrived in lost humility at first, in ones and twos, by leaky boat and makeshift raft, risking the unknown to flee the horribly known. In the beginning, the draenei had aided as they could, giving the refugees a place outside the Exodar, healing them, and sharing food and water. But then the outcasts had begun sending out word to find their friends and families, and the call echoed throughout Kalimdor: "The Prophet holds Azuremyst safe. The Prophet foresaw the Cataclysm and will make everything right." and the refugee camp quickly grew and boasted a thousand exiles. When the draenei tested the nearly repaired Exodar, the refugees thought the draenei were going to leave Azeroth, and started rioting. The riots escalated and both human and draenei were wounded in the conflict. The riots were stopped when High Prophet Velen spoke collectively to both sites, and not long after the refugees started returning to their former homes, to help rebuild after the Cataclysm.[2]

During the third invasion of Azeroth, Azuremyst Isle and the Exodar were attacked by the Burning Legion.

Later during the conflict, the area became a staging ground for the quest to invade Argus and stop the Legion once and for all. The island's western shore was where the draenei were training. The Vindicaar, a draenei ship that provided passage to Argus could be seen hovering above the island.

After the Burning of Teldrassil, some of the survivors were evacuated to Azuremyst. The evacuation was overseen by Dentaria Silverglade.[4]

Arcane storms strike this peaceful area off the coast of Kalimdor. Evergreens and purple flowers cover the land. The island itself is divided into two parts by the Crystalbrook River, running north-south. The eastern, slightly smaller region is dubbed Ammen Vale, as it is sheltered by hills on all sides. To the southwest lies Silvermyst Isle, close enough to reach by swimming without difficulty, and small enough to be considered part of the main island.

Azuremyst Isle contains no dungeons, raid dungeons, micro dungeons, or battlegrounds. It is the starting area for the draenei and contains a 1-5 leveling area, Ammen Vale. The draenei city, the Exodar, can also be found in this zone with a flight path to Bloodmyst Isle. The mainland is accessible by boat from Valaar's Berth or by flight path from the Exodar, both going to Rut'theran Village.

Thunderstorms and foggy nights are common in the area.[5][6] 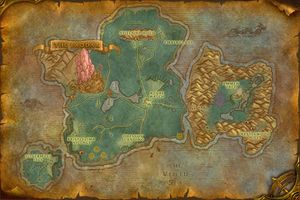 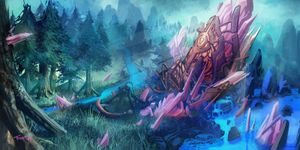 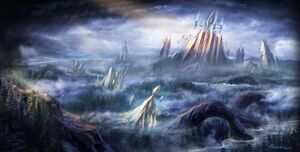 Flight paths from The Exodar

To reach the island as a Horde character you first have to fly to Teldrassil. From there you can take the boat from Rut'theran Village. 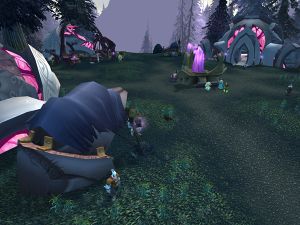 Azure Watch, a small settlement nearby the Exodar

Azuremyst Isle is the new home of several notable people; not all of them draenei. At the Crash Site in Ammen Vale, Vindicator Aldar and Technician Zhanaa work tirelessly to keep in contact with other draenei scattered across the island. At Azure Watch, Exarch Menelaous watches over the people of the village. Admiral Odesyus, recently forced to land on the southern coast of the island, does his best to root out the traitors in his crew and help his new-found allies, the draenei. And High Chief Stillpine seeks aid from the newly arrived draenei to take back Stillpine Hold.

The quests of Azuremyst Isle range from the early level 1-5 quests of Ammen Vale to the level 5-10 quests of the main isle. Quests of note include the The Prophecy of Akida quest chain, in which draenei learn the language of the furbolgs; a quest chain involving Admiral Odesyus as he hunts down the traitor in his crew; and quests given by the furbolgs of Stillpine Hold.

Many of the 1-5 quests are draenei-only, but the 6+ quests are available to any race. 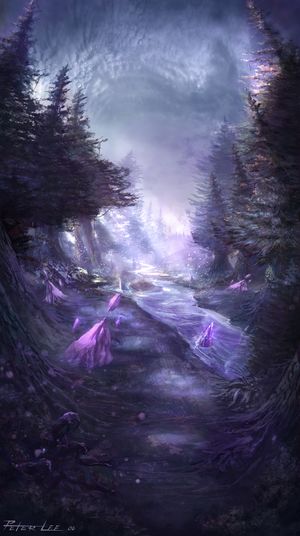