For how the Badlands was prior to Cataclysm, see Badlands (Classic).

The Badlands is an arid and desolate region in Khaz Modan accessed via the Searing Gorge to the west and Loch Modan to the north. Only the hardiest of creatures can survive in the arid wastes, such as feral coyotes, cougars and buzzards. The black dragonflight have a pronounced presence in the area, mainly in the Lethlor Ravine and, later, in the Dustbowl. Scattered across the Badlands are camps of the Dustbelcher ogres.

Despite its position between Stormwind and Dun Morogh, the Badlands have traditionally been Horde territory, though the Alliance have recently established the encampment of Dragon's Mouth in the western part of the region.[1] To the north of Dragon's Mouth lies the Horde stronghold of New Kargath, built after its predecessor was buried by an avalanche during the Cataclysm. In the east is the goblin town of Fuselight and its sister port town, Fuselight-by-the-Sea, both controlled by the neutral Steamwheedle Cartel. In the west, a massive, charred ravine called the Scar of the Worldbreaker was formed when Deathwing passed through the area.

In the northeast, near the border with Loch Modan, lie the ruins of a titan-forged fortress known as Uldaman, home to titan-forged earthen, savage troggs, and much information about the origins of the dwarven race, while the smaller Tomb of the Watchers has recently been unearthed in the center of the region. As a result, the Alliance-affiliated Explorers' League, the dwarven Dark Iron clan and the blood elven Reliquary are fighting for control over the ruins and any titan artifacts that may lie within. 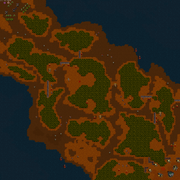 The Badlands during the Second War.

During the Second War, warriors of the Black Tooth Grin clan were tasked with escorting Cho'gall and his entourage of the Twilight's Hammer clan through the Badlands in order to have him personally inspect the oil refineries around Grim Batol. A taskforce of Stromgarde warriors were present in the area despite the occupation of Khaz Modan by the Horde, and the humans were killed by the orcs.[2]

Years later, Kargath, the only Horde outpost in Khaz Modan at the time, was located here. The Kargath Expeditionary Force was sent by Warchief Thrall himself to slay Rend Blackhand of the renegade Blackrock clan. The fort was destroyed during the Cataclysm, and replaced by nearby New Kargath.

Players can access the zone by using a rocket from Light's Hope Chapel in the Eastern Plaguelands that goes to the goblin port, Fuselight-by-the-Sea, with the quest

It is also accessible on foot by a mountain pas from the Searing Gorge, or alternatively, from Loch Modan, by a ramp that leads down the chasm between the two zones and another one back up.

This desolate wasteland is cracked and dry, consisting mostly of flat stretches of land enclosed by the surrounding mountains. A few hills dot the landscape, and the eastern part of the zone is a large canyon.

The instanced dungeon Uldaman can be found in this area. In addition, there are a few micro dungeons in the Badlands. There are no battlegrounds in this zone.

Map of the Badlands in Cataclysm.

Map of the Badlands in Classic.

Scar of the Worldbreaker

The Badlands are a cracked desert of dry earth, scattered boulders, and winding canyons. Ogres trundle across the cracked ground, looking for victims. Lions prowl the canyons, and drakes hunt across the evening sky while Horde orcs man a fortress to keep a watch on their renegade brethren in the eastern lands. Add to this Ironforge's old enemies— troggs and Dark Iron dwarves — and it is clear why this region is called the Badlands. Yet in all this chaos stout Ironforge prospectors shrug off the danger and search this desolate land for Titan artifacts, inspired by the recently unearthed Uldaman.[3][4]

Ages ago, the Badlands were a verdant valley, lush with natural resources. Three hundred years ago Ragnaros' arrival blasted this region, scorched the land, and transformed it into what it is today — a desolate, barren wasteland. The area is inhospitable, and was rarely visited until recently.[3][7]

In the northern Badlands there is a canyon, in which lies the entrance to Uldaman's ruins — a massive, ancient Titan city. Ironforge prospectors discovered the ruins only a few years ago and they contain markings bearing secrets of the dwarves' true ancestry. Unfortunately, after months of digging and uncovering amazing finds, including scrawls in the ancient tunnels that gave them the first hint of the dwarves' true genesis, the prospectors also unearthed another Titan remnant: the vile and primitive Stonevault troggs who had been sleeping within. These foul creatures drove the dwarves from the site and claimed Uldaman as their own, now bitterly defending their stolen city. If not for the troggs, the dwarves would have all sorts of Titan powers at their disposal, with the interesting stone flesh thing being just the beginning. Some would think the Titans, being as smart as they were, could have found a better place to put these vile creatures.[4][6]

Some Ironforge prospectors discovered a small cave system that would eventually wind into one of Uldaman's recesses. Oozes and monstrous scorpions infested the cave system, and troggs ruled the underground Titan city. Yet the caves leaded directly to a massive room, at the far end of which is a block inscribed with spidery runes. Troggs worshiped this strange altar. They nevertheless noticed the prospectors and attacked the dwarves, who fled their vast numbers. Only one prospector managed to survive. Now, he hopes to hire a band of mercenaries to assist him in sneaking into the Uldaman temple and claiming the altar.[6]

Few people live in this realm, and "culture" is nonexistent. Drysnout gnolls are more numerous than the other factions, due mainly to the fact that their birth rate is higher than that of randy rabbits. The gnolls are easy prey for the Dark Iron dwarves, drakes and ogres that roam the Badlands. You can tell a Drysnout because he wears brown clothing, simple leather armor, and is running for his life.

The Badlands holds few cultured races. Ironforge prospectors brave the dangers to search for Titan relics. These brave dwarves keep themselves well defended, carrying axes and rifles as well as picks and shovels. Small teams and wagons move carefully across the baked earth. If you see a dwarf in the Badlands that is not a Dark Iron, he is a prospector. These dwarves often hire mercenaries for additional protection. If you wish to travel in the Badlands it is suggested joining one of these expeditions for mutual protection.

The Horde has an outpost in the Badlands called Kargath, and the orcs within are strong and noble. They are a bit suspicious, but so is everyone in the Badlands. Kargath's citizens are almost all warriors, and they welcome any good soul who enters, whether Horde or Alliance.[4][5]

The Badlands is a high desert valley, bone dry and hot. The Searing Gorge is to the west, while the lush Loch Modan is located in the mountains to the north. Searing winds blow the heat around but do nothing to cool this sweltering land. The harsh environment allows only the heartiest plants — cacti and shrub brush — to survive. You can bring plenty of water, but it still might not be enough. It is advised for you to read up on your desert survival skills before coming here, travel at night and sleep during the day.[4]

The Badlands are rocky and flat. Mountains to the north block cool air and moisture from Loch Modan. Canyons surround the Badlands, and they are rife with lions and vicious humanoids. Only the hardiest plants and animals survive — withered trees, cacti, scorpions and bobcats. The landscape also hides rock elementals. The smaller ones are easier to kill. Run from the bigger ones unless you want to see what you look like as a pasty smear on the ground.[5]

There seems to be a buried troll temple to the northwest of the Dustbowl's middle part. The "troll temple" has two snake head statues that are similar to those found in the Hinterlands.