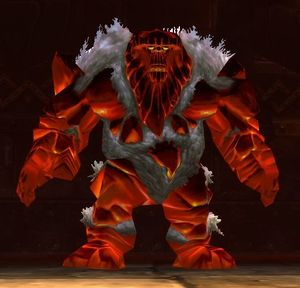 Bael'Gar resides in the Depths of Blackrock: A being of pure flame, born of the fires of Ragnaros. - Cyrus Therepentous

The monstrous molten giant Bael'Gar lumbers across the Dark Iron Highway, a stunning feat of dwarven engineering carved into Blackrock Depths. Ragnaros pulled the giant from the heart of the Firelands to guard a massive sealed door at one end of the highway. According to legend, only the Firelord and the Dark Iron clan's highest-ranking members know what lies beyond the mysterious gate.