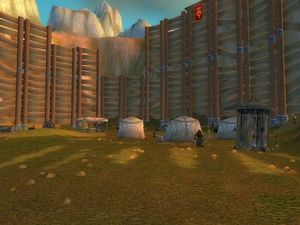 “Remember this. Do not forget seeing the fate of those who would scar the Earth Mother.”

— Ahmo Thunderhorn on the fate of the diggers

The Bael'dun Digsite is an excavation site of the dwarven expedition based at Bael Modan. It is a large quarry dug into the mountainside in the western edge of Mulgore.[33, 47] 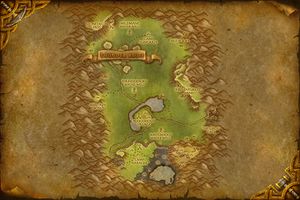 This incursion was against the warnings of Baine Bloodhoof, who saw the excavations as an affront to the Earth Mother, and as diplomatic solutions failed, the Bloodhoof tribe resolved to drive the invaders out by taking and breaking their pickaxes.

The dwarves refused to heed the tauren's warnings and their reckless digging infuriated the spirits of the land and killed them. Since the Cataclysm, Ahmo Thunderhorn sends adventurers to calm the Agitated Earth Spirits in the ruined dig site with a magic drum.[1]

The Explorers' Guild has set up an excavation site here of 200 inhabitants. It is a strong supply line runs from Bael'dun to Bael Modan in the Barrens.

After Brann Bronzebeard visited the dwarves of the digsite he knew he needed to act before his friends were put in greater danger. While he visited Thunder Bluff he suggested to Cairne Bloodhoof that he send a group of his own people to work with the dwarves in exchange for making sure that the land was properly cared for. Cairne agreed to bring up his offer to his council of elders for discussion. Apparently, it worked, as Baine Bloodhoof asked a group of young tauren to act as emissaries to the dwarven excavation of Bael’dun to convince the dwarves to cease their careless digging. Given enough effort, the tauren apparently convinced the dwarves to allow a shaman to oversee their site to make sure that the land is properly cared for during the excavation, and that the dwarves return to the land as much as they take.[2]