Bael Modan is a dwarven base in the Southern Barrens consisting of a fortress with a giant cannon and an excavation site for digging. Before the dwarves came, the area was home to the Stonespire tauren.[1] There is an ancient titan complex and research facility under Bael Modan. It seems likely that there are many relics and much knowledge to be discovered deep beneath the surface.[2]

Bael'dun Keep was once next to the village of the Stonespire tauren, but conflicts between the dwarves and tauren caused by the dwarves using explosives for excavating in land the Stonespire tauren considered holy resulted in most of the Stonespire tribe to be killed or driven off their ancestral lands. Their old village is now torn apart by dwarven digging machines. Gann Stonespire, a tauren who frequently wanders the roads nearby, attempted to reach a diplomatic resolution but failed. He now seeks revenge by sending Horde adventurers to fight the dwarves.

Bael Modan possesses several flying machines. One of the most skilled pilots in all Azeroth, Lord Cyrik Blackforge, is in charge of one of them. Gann Stonespire later requests brave Horde adventurers to destroy it with explosives.

The dwarves dug up the

[Tear of the Moons]. The stone had made a dwarf named Feegly the Exiled go insane and he asked Horde adventurers to retrieve it.[3] When Feegly got his hands on the stone, a curse was placed on him, turning him into a trogg.

Alliance adventurers killed Feegly, leaving the location of the Tear of the Moons unknown, but he was "sniffing around the dig site again".[4]

The dwarves of Bael Modan hired Wildhammer mercenaries to firebomb Camp Taurajo.[5] In the initial Horde counter-attack, Gann Stonespire led an angry mob of Horde civilians to raid the dwarven digsites in Bael Modan.[6] Gann was wounded in this attack by Marley Twinbraid. With help from a dying Gann Stonespire and a goblin rogue called Weezil Slipshadow, Horde players sabotaged a dwarven artillery shell for the giant cannon erected around Bael'dun Keep causing the whole place to blow up.[7] [8] Marley Twinbraid, the son of General Twinbraid, was killed by the explosion which caused his plane to crash.[9]

A Bael'dun Excavator standing before the cave can be interacted with by Alliance adventurers. He recommends the adventurer to turn away, as before the Cataclysm hit, the dwarves dug up "something that should've stayed buried", and hopes that the landslide was enough to keep "it" down.[10]

The Horde avoided the dwarves of Bael Modan as they recovered usable salvage within the Battlescar of the Southern Barrens, but faced off against Logan Talonstrike.[11]

The Alliance used Bael Modan as a staging point against Mulgore. Because of that, it was targeted by the Horde to be purged. The Horde champions and a tauren warparty with Ruk Warstomper attacked it and encountered Borim Goldhammer.[12] 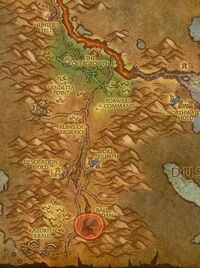 Bael Modan is heralded by some as the new home of the dwarves and gnomes on Kalimdor.[13] Bael Modan (the Red Mountain in Dwarven) is the name the Ironforge dwarves have given to the settlement. With a population of 800, it is the largest Alliance stronghold in the Barrens. It is marked by the sturdy stone walls and guard towers blocking the mouth of a cavern into the mountain. An encampment just inside the wall offers shelter to Alliance caravans and travelers crossing the Barrens. The stores of food and supplies at Bael Modan are a tempting target to centaur warbands and quilboar raiders, but thus far the dwarves' trusty rifles and mortars have proven more than able to withstand such attacks.

Those who visit discover that the dwarves have not forgotten their traditional weapons since the invention of gunpowder. The dwarves of Bael Modan have established a midwinter tournament, with the highest prizes - elaborate bronze helms - given to those most skilled with the axe and the hammer.[14]

When the Ironforge dwarves learned of their old friends, the gnomes, arrival in Theramore, the Ironforge dwarves invited the gnomes to settle in their new home, Bael Modan, and take up their inventing and tinkering where they left off. The gnomes found Theramore too crowded and politically charged, and gladly took the dwarves up on their invitation. For a while, most gnomes on Kalimdor remained secluded in Bael Modan (still reeling from the loss of their city Gnomeregan), having yet declared their presence on the continent. So for a while, a traveling gnome on Kalimdor was a rare sight to see. The few gnomes living in Bael Modan were loosely organized much like most of gnome society living back in Ironforge.[15]

The gnome ace Gaeval Thunderblast also spends his time in Bael Modan working on his ship, the Greased Lightning, while teaching new aces the art of aerial combat.[16]

Bael Modan in the RPG.

Over 100,000 years ago, beings known as titans built great laboratories throughout Azeroth. Bael Modan was one such site. The titans encrypted their research on banded platinum disks in a runic language now forgotten to mortal races. The site at Bael Modan served the titans as a storage facility for these discs before they packed up most of their gear and left. Khaz'goroth was the facility overseer and ran the facility nearly 100,000 years ago when the titans ceased the facility operations[17] A few guardians remained to protect the site for eternity and the titans sealed off the main entrance. One such guardian was Acheras the Custodian who was left in charge of the facility's maintenance and awaits his master's return.

The facility was once a multi-level complex above and below ground surrounded by a fortress wall. Geological forces and instability slowly sunk the facility into the ground.[17] Over the millennia titan ruins sunk deeper and deeper under the mountain. Earthquakes and shifting ground broke the ruins into several large areas and separated them, sometimes hundreds of feet apart and at many different elevations in the mountain. Natural tunnels and caves developed around the ruins as erosion and time took their toll. The area is now a great wilderness inhabited by fierce creatures, including the mighty Kolkar centaur tribe.[18]

The House of the Makers can be found in Bael Modan.

Conflicts with the tauren and centaur

Bael Modan has seen conflict with other races which share the Barrens. Each day that passed saw Bael Modan grow stronger as the inhabitants built up defenses and new dwarves and some other Alliance members came to settle.[14]

The dwarves and gnomes suffer constant attacks from the Horde, especially nearby tauren from Mulgore.[13]

Native dangers have not stopped the Ironforge dwarves from establishing the stronghold near the titan excavation site of Bael Modan. The centaur have made forays against it but were repelled decisively each time. Scouts claimed that the centaur were amassing other tribes to launch a major attack, but the dwarves were unconcerned.[14]