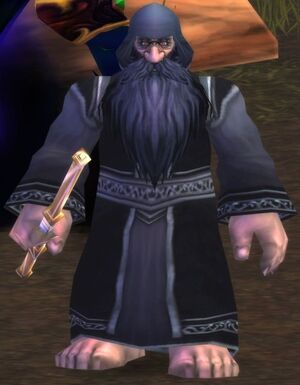 Balgaras in World of Warcraft.

Balgaras the Foul is a Dark Iron dwarf warlock who appears during the Battle of Thandol Span.

He led a group of Dark Iron dwarves in the Wetlands but remained hidden while his soldiers did his bidding. Roggo Harlbarrow spied on him and Longbraid the Grim later sent Alliance adventurers to kill him.[2]

Balgaras the Foul was leading a group of Dark Irons which seized control of Thandol Span. They also held Hjalmar Anvilmar captive. When Varian "Lo'Gosh" Wrynn, Thargas Anvilmar, Valeera Sanguinar and Broll Bearmantle reached the span they fought the Dark Iron dwarves. Balgaras was about to melt the Helm of the Anvilmars on Hjalmar's head, but Thargas cut his hand off and freed his brother. However, with his other hand, Balgaras ignited an explosive, but Hjalmar protected his brother from the explosion. Both Balgaras and Hjalmar died from the explosion but Hjalmar succeeded in preventing the destruction of Thandol Span.

After being killed a while ago, Balgaras returned from his apparent death and made an appearance in

[25] The Battle of Thandol Span. Not wanting to be ruled under Moira Thaurissan, he swore loyalty to the Twilight's Hammer. After Calamoth Ashbeard was killed, Balgaras and the others turned into purple-blueish smoke.[3] Whether it means that they could only stay alive because of Calamoth Ashbeard or they retreated remains unclear.