Ballistae (sometimes incorrectly pluralized ballistas[1]) are siege weapons used primarily by humans and elves. They were first built by the night elves, but the forces of the Alliance of Lordaeron later developed ballistae of their own design.

Based on the same mechanical principles as the crossbow but on a larger scale, ballistae are siege weapons that hurl stones or metal projectiles toward their targets. After cranking back lever arms held tight in skeins of leather or sinew, the crew loads a projectile into the ballista's central track. When the trigger is released, the stored tension in the skeins of the ballista propels the projectile downrange at incredible speed.

Ballistae were also used during the fall of Shattrath on Draenor.[2]

Ballistae launched steel-tipped bolts to impale all in their path. As they required an awesome amount of force to be placed upon their tremendous bowstrings, these machines of war were reinforced with lumber from the precious Ironwood trees. The ballista, a product of human design and elven craftsmanship, was a symbol of the unity between all those who have allied themselves against the Horde. The dwarves proved to be another valuable ally, in that they could be employed to design improved missiles which made the ballista the most devastating weapon of the Alliance.[3]

During the Third War the Alliance favored the steam tanks and siege engines instead, but nowadays modern ballistae similar to the original ones can be found nearly anywhere human military forces are. Destroyed ballistae are also common to find whether on old Second War battlefields or in any of the abandoned cities of Lordaeron.

Crafted from the sturdy ashenwood trees, the night elves' ballistae are deadly siege machines built to fling heavy bolts of ironwood at both enemy forces and structures. Ballistae are considered an invaluable asset to the night elf Sentinels due to their mobility and accuracy in tense combat situations.[4]

Night elves largely replaced the weapons with glaive throwers after the Third War.

The high elves used ballistae to fend off Arthas Menethil as he tried to attack their capital of Silvermoon City in Warcraft III: Reign of Chaos. It was a siege unit that had a long range, built from the high elven barracks. The blood elves did not have ballistae in their own Warcraft III: The Frozen Throne campaign, although they strangely did have glaive throwers in the Scourge campaign.

Several blood elven ballistae can be seen in World of Warcraft, such as outside Silvermoon City.

The trolls of the Zandalar and Darkspear tribes both made ballistae of their own. They were first during the Siege of Orgrimmar as well as on the alternate Draenor during the war in Draenor.

The orcs of the Thunderlord clan are known to have used ballistae in Frostfire Ridge.

The yaungol have created a form of ballista also known as treelauncher[5] or ballista spearthrower.[1]

The draenei of Draenor were known to use ballistae in their battle. The draenei of Azuremyst Isle were eventually able to build up their own ballistae in time for the third invasion, being worked on by Exodar Artificers. They are also used at the Battle for Lordaeron; specifically they are identified as being Auchenai ballistae.[6]

Please add any available information to this section.
The Sashj'tar naga brought ballistae (or harpoon guns) to Suramar on the Broken Isles. 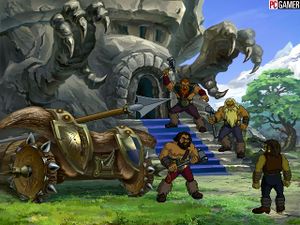 In Warcraft Adventures, a ballista was seen protecting a gryphon aviary alongside some Wildhammer clan dwarves.

A ballista type used by forces after the third war. A field ballista can be used by small, two-man crew and is usually directed toward less-fortified secondary targets such as mid-field entrenchments. Typically, a field ballista crew travels on two mounts, one pulling the collapsed field ballista like a travois while the other carries a supply of projectiles.[7]

A ballista type used by forces after the third war. Crew ballistae are larger, steel-framed versions of the field ballista. The steel frame is sturdier than wood, and metal housings surrounding the skeins protect them from being damaged by the environment or enemy fire. The four men who wield a crew ballista are divided into two "brutes" who crank the lever arms, the "slot" who loads the bolts into the track, and the "sharp" who aims and triggers the weapon.[8]

A ballista type used by forces after the third war. A terror of the battlefield, the siege ballista can hurl enormous bolts over tremendous distances to penetrate all but the thickest armor. Each arm of a siege ballista is eight feet in length, and the entire weapon must be mounted on a wheeled cart to be portable - and then anchored into place on the battlefield so that it isn't thrown forward when it is fired.[9]