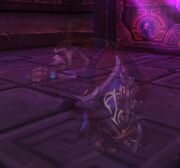 Ban Bearheart was with Lao-Chin the Iron Belly and Suna Silentstrike in the Shado-Pan defense force of the Ox Gate when the yaungol invaded Kun-Lai Summit. With aid from adventurers, they fended off the invasion, but Suna's husband, Lin Silentstrike, was captured by the enemy. Suna insisted on rescuing her husband and left for Townlong Steppes alone while Ban decided to find out why the Monastery didn't send reinforcements. When he arrived at the Monastery he realized that the Sha of Hatred and the Sha of Violence had already taken control, and Taran Zhu, Lord of the Shado-Pan, had been possessed.

Ban infiltrated the Monastery and organized a group of the adventurers to cleanse it from the Sha's corruption. Finally, the Sha of Violence was defeated and the Sha of Hatred fled to Townlong, leaving Taran Zhu behind.

With Monastery redeemed, Ban traveled with Taran Zhu, Taoshi, and Yalia Sagewhisper to Townlong Steppes in their Sha Hunt quest. It was in Longying Outpost where they met Suna Silentstrike, who urged them to mount an attack on Fire Camp Osul in order to save her husband.

Ban was put in charge of the mission to vanquish the yaungol and save the prisoners by Taran when he departed. However, Suna disagreed Ban's decisions as she feared his conservative tactics would cost her husband's life. But Ban as a commander, though shared Suna's desire to stop the yaungol, would have to consider every soldier and aspect of the battle. In the end, the enemy was defeated and many prisoners were rescued, yet they could not save Lin's life. Suna blamed the faults to Ban and ran off on her own to track down the source of yaungol's aggression. In search of Suna, Ban and Yalia followed her tracked to Hatred's Vice, only to discovered every yaungol there was dead, and the place was deeply corrupted by the Sha. What's more, Suna was possessed by the Sha of Hatred. With their best efforts, Suna was finally freed from the Sha's control. Yet her wound was too grievous and before she died, she forgave Ban for everything. Ban mourned for the loss of a great friend and swore he would not rest until the Sha of Hatred is defeated.

Later, Ban met up with Taran and joined the hunting party. They cornered and located Sha of Hatred at Sik'vess Lair, defeating it once and for all.

Ban and the elite Shado-Pan force.

Ban Bearheart continued as the commander of Shado-Pan force in Shado-Pan Garrison. There, he oversaw the operations against the mogu, the mantid, and the yaungol on daily basis. When the mogu warlord, Shan Bu, launched a surprised attack and besieged the Niuzao Temple, hoping to kill Niuzao the Black Ox, Ban quickly organized an elite group of Shado-Pan to rescue the Celestial. Together, they defeated Hei Feng, an abomination created by Shan Bu, sending the mogu warlord to retreat as he saw his invasion had failed.

Ban can be found on the Timeless Isle overlooking the Celestial Court and apparently speaking with Old Hillpaw.

Ban is involved in the following quests in Kun-Lai Summit:

...in the Shado-Pan Monastery:

Before first quest
I'm sorry, outsider. Unless you are here on official business, I'm afraid I can't be of any assistance to you.

After first quest
An ill wind blows here in Kun-Lai. I fear a presence unseen for many years may be returning, and these yaungol are just a symptom of it.

From the northwest, the mogu practice their dark arts.

From the north, the yaungol press us.

There is too much to do, and too little time.

When you can say the same, then perhaps you are ready to join our brotherhood.