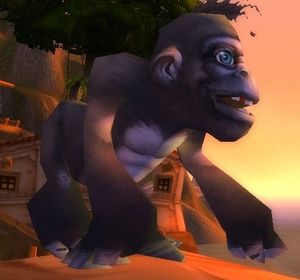 Banana Charm summons and dismisses Bananas, a baby ape pet that follows you around, meaning it is a non-combat pet and will not aid you in battle.

This item is available only to those who receive the King Mukla card in the World of Warcraft Through the Dark Portal TCG expansion that has the "scratch off gently" strip. Once you scratch and reveal the code, you can turn it in to Landro Longshot in Booty Bay who will give you Banana Charm.

It can be listed on the Black Market Auction House by Landro Longshot, for the opening bid of 15,000

Although loath to part with Bananas, Landro realized it would be safer if the pet was far from Booty Bay when his father, King Mukla, discovered he was missing.

A sample Bananas pet exists as a neutral level 1 beast near Landro Longshot.

This pet is also a possible drop from